Approximately forty Members and friends were at Weston Favell on 11th March to see a presentation by Brian Holland, assisted by Michael Chapman, entitled “Ramblings around the UK 1962/3”.

Having been a early teenaged photographer from around 1954, Brian reached the end of 1961 and realised that his Brownie 127 camera was perhaps not quite up with modern practice for railway photography, especially in that he could see the writing on the wall a little more as he became older. His solution came in the shape of an Ilford Sportsman 35mm camera, which he realised would have films capable of providing 36 exposures before he had to spend more money on another film. However he had first to find the cash to obtain the camera, which, with a case would cost in the region of £14, this in early 1962, whilst earning £4 per week.

Having done the deed, he then proceeded to take his camera with him on his cycle ramblings around the East Midlands from his Leicester base, as well as on forays further afield using rail and sometimes car and family holiday travel.

He first showed some shots at Leicester shed (15C) and a Jubilee (45562), passing through the Midland station with a southbound fitted freight. By April he found himself in Durham, followed by Coalville, Burton, Derby works and Derby loco. By then about twenty Jubilees, redundant in the main from Midland division sheds had been foisted onto Burton shed, and he was glad to be able to photograph what he considered very welcome additions to the depot. These included 45561, 45575 and 45648, but 45532 of Nottingham would also have been very welcome.

Brian’s show went on via Oxenholme, Carlisle Upperby, onto the Western Region at Swindon, Oxford and the Newton Abbott of August 1962, which he had been reliably assured would be a steam-starved station, which actually was nowhere near that dire prophesy. At Exeter St. David’s, his highlight must surely have been the regular sight of non-stop expresses bursting between Southern and Western expresses held at their platforms to allow them on their way.

September 1962 found him on the Western Region again, hoping to see the last workings of the “King” Class. The paucity of reliable, up to date information, compared with today, meant that his hopes were probably not achieved, although the picture of 6018 running southbound through Leamington bound for Swindon and withdrawal, allegedly having failed further north, would eventually become a valued memory.

Scenes at Leicester Belgrave Road station, and onwards to Skegness on the last day such trains ran, and the chaotic goings on at Grantham shed , and station on Christmas Eve 1962, when there was still a mix of steam on the main line, which allowed him shots of a large number of classes of ex-LNER classes. There was also a shot of Deltic D9005. 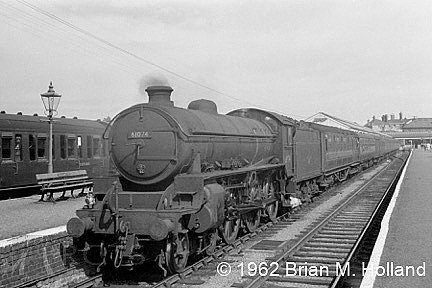 B1 4-6-0 61074 at Skegness Station heading the final train departure to Peterborough. The loco is from 34E New England Shed, Peterborough. Brian M. Holland

Like many of us sharing our own very similar memories and feelings of those days, I wager that he felt guilty when he pressed the shutter for that one, but I bet he doesn’t actually still feel that way!

This was an afternoon of pure nostalgia and was well presented; Brian as Lead Singer, with Michael on Lead Guitar – a very good team!