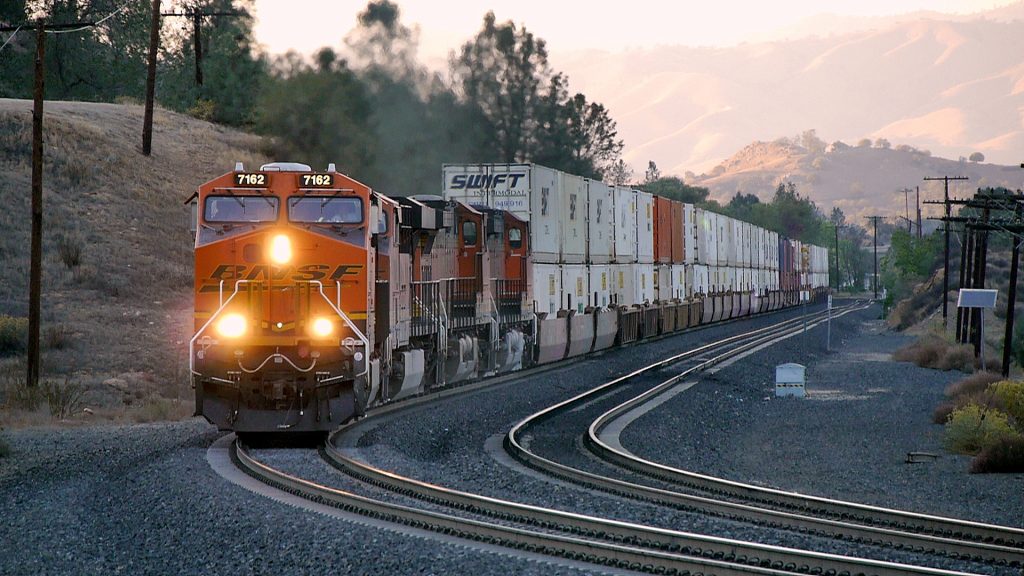 After an eighteen month break from face-to-face meetings, we made a thunderous start to our 2021-22 programme with a magnificent tour of rail operations in the Los Angeles area. Tony began by describing the geography and history of the area and the routes taken by the Southern Pacific, Santa Fe and Union Pacific lines in the Los Angeles Basin. We then went to Union Station (built as recently as 1939) and saw examples of Metrolink commuter services and Amtrak ‘Pacific Surfliner’ Regional services to San Diego with the newly introduced Siemens Charger locomotives. Following a run along the Pacific Coast we were treated to delightful footage of Union Pacific 4-8-8-4 ‘Big Boy’ locomotive 4014 hauling an excursion from Los Angeles to Barstow (for the sum of a mere £500 single!), in celebration of the 150 th anniversary of trans-continental rail travel in the USA.

The sheer scale of the liner traffic in the area was then vividly shown as Tony focused on the Cajon Canyon and the Tehachapi Pass. Here we saw videos of the vast numbers of double-stacked liner trains with anything between three and eight locomotives at the front and frequently pairs of banking engines at the rear. The sound of these engines heading up the 2.2% gradient to reach the summits at 4,000 feet had to be heard to be believed! It was interesting to note the combination of domestic containers and international containers and Tony explained how the partnership between the railroad companies and haulier J.B. Hunt had transformed the fortunes of the railway as far back as the 70s and 80s.

The evening concluded with a visit to the Orange Empire Railroad Museum where we saw examples of 3’6” gauge Los Angeles street cars, a Pacific Electric Inter-urban car and a range of delightful infrastructure items including a ‘Magnetic Flagman’ crossing bell and an ‘Acme Traffic Regulator’ signal.

The meeting ended at 10:05 with a resounding vote of thanks to Tony and much appreciation at being able to meet again.