A joint afternoon Meeting with the Milton Keynes branch was held at Roade on 18th March 2019. Over 50 Members and friends attended to see a selection of photographs and cine films, most of which were the work of the father of Michael Clemens, who presented the show under the title “1960s steam in the Midlands area”.

Michael explained that his father enjoyed forays far and wide with his circle of like-minded friends, and, in the fullness of time the youthful Michael was able to join them, eventually leading to a substantial number of his own pictures. Most enthusiasts of the period tended to spread ripple-like from their home town, their horizons steadily widening.

Ex GWR 4-6-0 7022 "Hereford Castle" outside Worcester MPD (85A) in August 1964 where it was retained as a stnby for the newly installed diesels on the Worcester to Paddington route. Alan Maund

The “Midlands” referred to in the title did not necessarily match what we would later come to understand from the local TV companies, so shots at Swindon, Verney Junction, Crewe, Sheffield and the Woodhead route could be described under “penetrating lines”, to use an early BR term. In between, Worcester (local 7022 nearing its’ end in immaculate condition), Oxford (Winston Churchill’s funeral train), Crewe (45552 showing how good was the Brunswick green livery, and how we now view the original “electric blue with white roof on E3005 nostalgically). 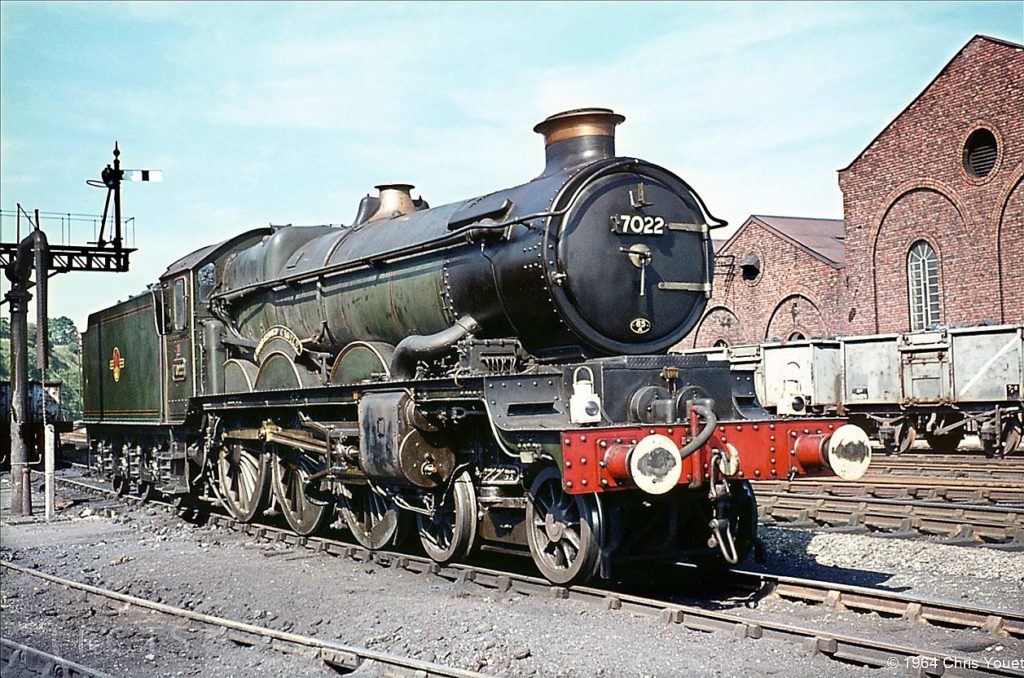 Ex GWR 4-6-0 7022 "Hereford Castle" outside Worcester MPD (85A) in August 1964 where it was retained as a stnby for the newly installed diesels on the Worcester to Paddington route. Alan Maund

Cine films included on board runs out of Marylebone station behind various Class 5s. Also a lengthy film of a northbound Great Central line train heading north from Lutterworth, parallel with the newly opened M1 motorway, including a station stop at Ashby Magna, where the car driver had to invent a hard shoulder emergency in order the include the stop. He would probably be surrounded by “authority” within seconds had it been 2019 rather than the late 1960s.

Local in the audience would have been grateful for the views of the industrial ironstone workings around north Northamptonshire at Brixworth, Hanging Houghton, Scaldwell and Lamport in mid 1963. Even in 1963, these locations were somewhere in another world for many a Duston West based enthusiast, so everyone present would have been grateful for the efforts of Michael, his father and his friends in those far off days. The first class programme was presented without a hitch.

As an aside, Michael showed us how he managed to digitally identify a Western Region “County” 4-6-0 as “County of Pembroke”, the photograph of which was seemingly taken in conditions suitable for a dark, wet night such as we all remember. His efforts time-wise would not have been for the faint-hearted!