Branch Member Humphrey Gillott started the evening off with shots from 2002/03 taken at Forders Sidings on the Bedford to Bletchley Line. He showed the Signal Box exterior and also inside shots of the diagram and frame and of Class 60s and 66s passing by. We saw 66001 shunting in the yard with 67024 departing to Bedford. There were three or four other 66s as well as 08578 Dobbin.

A couple of shots from 1965 saw ‘Britannia’ Class 70024 Vulcan at Marylebone and Harrow-on-the-Hill.

Next up was Mike Watson with a tour of former Yugoslavia countries in June 2014; we started in Slovenia where we saw the Bohinj Railway which links Jesenice in Slovenia with Trieste in Italy and he travelled from Jesenice to Nova Gorica, a distance of 89km.

Starting the journey at Jesenice we saw the 4w balconied coaches he travelled in and the German Kriegslok 2-10-0 locomotive JZ No. 33-037 which was built in 1944 and is one of around 8,000 of this type. He took a few photos of the loco in various places and we saw a badly graffitied DMU. Atmospheric shots of steam, tunnels, viaducts, and signal boxes followed, also close-ups of various parts of the Class 33, which led to some discussion on exterior pipework, injectors and brake pumps! We then popped over to Ljubljana Railway Museum where there were many locos stabled outside quietly rusting away. Going inside we saw another JZ Class 33, a 2-8-2, and quite a few unidentified locos along with inspection bicycles and a motorised trolley. A German Class 58 2-10-0 which formerly served with the Prussian Railways was photographed, also some signal box levers. He finished his first half presentation with some photos of the lovely town of Ljubljana.

After the break Richard Whitehead showed a few photos of the Puffing Billy Railway in Oz, a 2’6” gauge Heritage line. It featured Baldwins 7A and 14A with a cab shot finishing off with a Beyer Garratt 2-6-0 + 0-6-2 No. G42.

Bernie Holland was next up with a large miscellany over the years kicking off with a busy shot of Corby Steel Works at its prime. A 1998 shot of 87101 Stephenson on the Up Slow at Harrow Weald then eleven years later 70013 Oliver Cromwell in the same spot.

Moving on to 2017 we saw GWR 0-4-2T 1450 with its one carriage at Hayles Abbey Halt, a fine shot of Class 66779 Evening Star at Harrow & Wealdstone on 4M23 Felixstowe to Hams Hall, and also at Hatch End the following day; it was pointed out that the loco has the engine unit from 66734 (originally 66402), 66734 being written off and scrapped after running into a landslide and derailment near Loch Treig, whilst working a train from North Blyth to Fort William in June 2012.

In September Bernie was at Harrow Weald for Class 70011 on the Down Slow and then a Pendolino on the Up Fast, later that day at Apsley Class 88002 was top and tailing with 68025, it should have been sister loco 88001 but it wasn’t ready.

In October it was back to Hayles Abbey to see BR ‘Hall’ 4-6-0 No. 7903 Foremarke Hall which was also snapped at Bishop’s Cleeve. The next day saw Bernie at Princes Risborough where Chiltern Bubble Car 121 034 was in the Up platform and a little later on DVT 82304 was storming through on the middle road heading Up.

The following month saw him at the GWSR on an RCTS Visit where GWR 4-6-0 6023 King Edward II was seen at Winchcombe and Broadway, later in the day also at Broadway was Oliver Cromwell.

A few days later whilst staying in the Station Hotel at Faversham he popped into the station and snapped a terminating Javelin.

In March 2019 Bernie was at Kings Cross to snap Class 90019 in DB Livery and the next day the new Azuma. In May at Willesden Junction DC Lines there was EMU 710267 on test.

In June for the ‘Steam on the District Line’ event we saw Met No. 1 at Chiswick Park and Earl’s Court, and the following week at Horsted Keynes saw Bulleid Pacific No. 21C123 Blackmore Vale and 5MT 4-6-0 No. 73082 before moving to the Spa Valley Railway. Here Class 73140 was seen at Groombridge and two shots of 0-6-0ST Ugly watering at Eridge with a garden hose (which took 4 hours) and then about to take a train to Tunbridge Wells.

On Saturday 1st June he travelled to see friends who own Gotherington Station and took a snap of GWR 4-6-0 6023 King Edward II; the following day, which was another RCTS visit to the GWSR, we saw CR 0-4-4T No. 419 at Toddington with the group that accompanied him, along with B1 1264. At Gotherington, in the old goods yard, a lovely restored Wickham Trolley was conveying several RCTS members.

A photo from 23rd April 1956 showed a panorama of an RCTS dinner which included many old names including Branch Chairman Geoff Plumb’s father!!!

Back to 2012 there were the Olympic Rings at St. Pancras Station to finish his presentation. 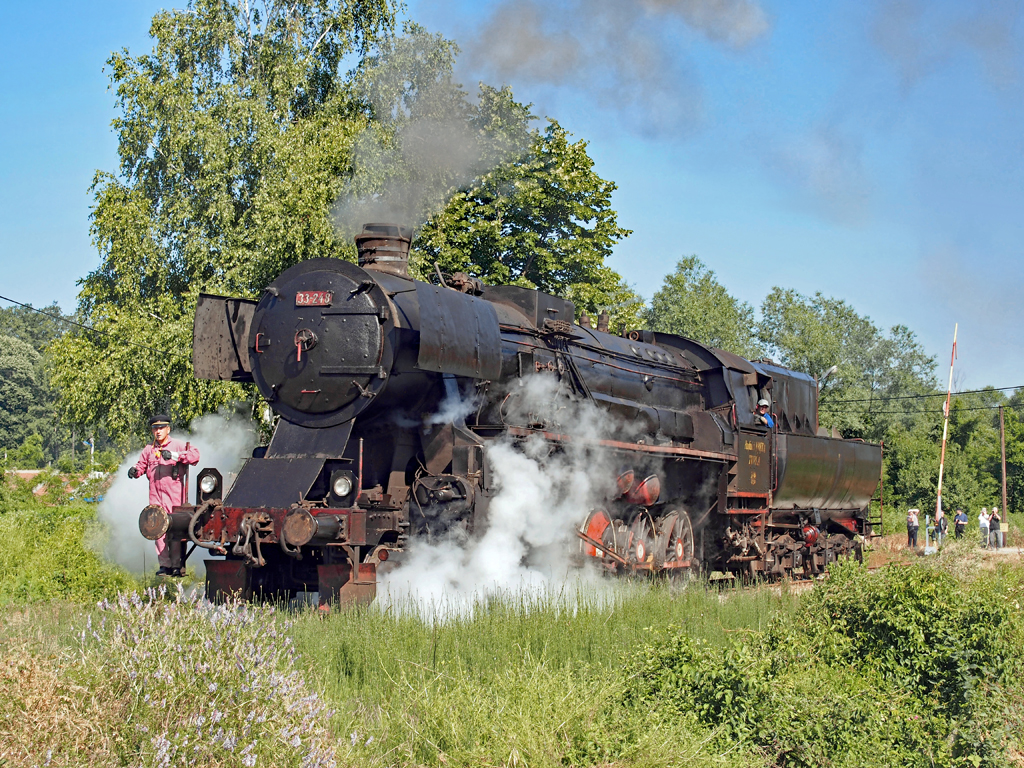 To finish off the last 20 minutes we returned to Mike Watson for some more of his former Yugoslavia 2014 tour, now moved on to Bosnia Herzegovina and Bukinje Depot between Tuzla and Doboj in coal-mining country. Here JZ Class 33 2-10-0 No. 33-248 was his tour train engine and many shots of this were taken. We also saw Class 62-123 (USATC Class S100 0-6-0T) and others in the workshops then onto the narrow gauge trains at Zibernice where we saw the loco being watered by the local Fire Brigade Tender. 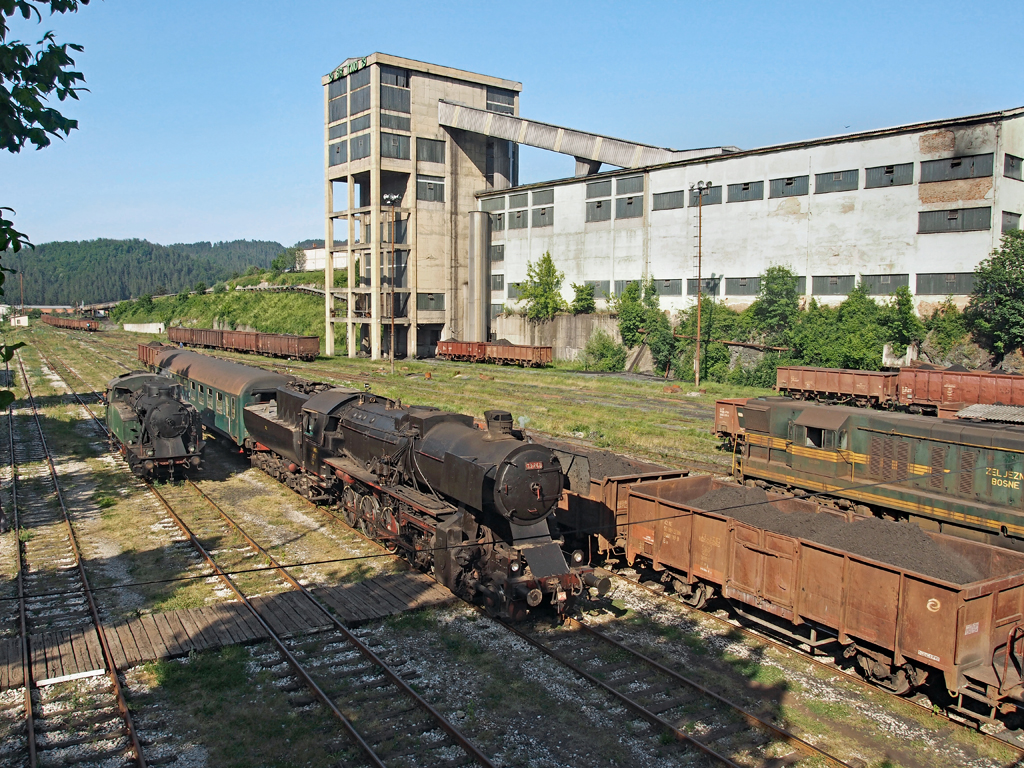 An interesting and varied evening enjoyed by 55 Zoomers and thank you once again to David Jackman for making it all possible.