Despite an enforced change to our Programme, occasioned by a loss of digital material, our ever reliable super-subs, Tommy Tomalin and Brian Sullivan, stepped in with “one they had made earlier”. This was Part 2 of “The North Staffordshire Railway”.

So, only a few weeks after seeing Part 1, we were presented with Part 2, which comprised of approximately 200 colour slides showing maps (Brian’s standard), colour and black and white slides (Tommy’s and Brian’s standard). These were backed up by black and white slides from the cameras of many well known photographers stretching back into the later days of the last but one Century, all of which were properly acknowledged. Additionally, slides showing the script were included, which made life easier for the audience, and certainly assisted Brian, who had acquired a nasty cold somewhere along the line.

A few weeks after their well received Part 1, we knew what to expectand we were not disappointed. We arrived at Crewe and Derby by virtue of running powers of the North Staffordshire Railway over Midland and North Western metals via a multitude of stations.

Highlights included how British Railways coped with the opening out of the Harecastle tunnels without closing the line for twenty years! Others of note covered the “Tutbury Jennie”, Horninglow station, a shot of an Egginton Junction station name board from 1974, looking suspiciously as if it had been deposited for “collection later”, views of the Foxfield Railway operating in preservation days, a surprising shot of a Crewe to Derby train headed by a borrowed Clan pacific, 72005, an engine which your reviewer to this day continues to be disappointed by the three occasions he saw a “Clan” – each time 72005.

A shot of a NSR 4-4-0 taking over a London Euston to Manchester express in 1910 at Stoke reminded the audience that the NSR worked closely with the LNWR at that period. 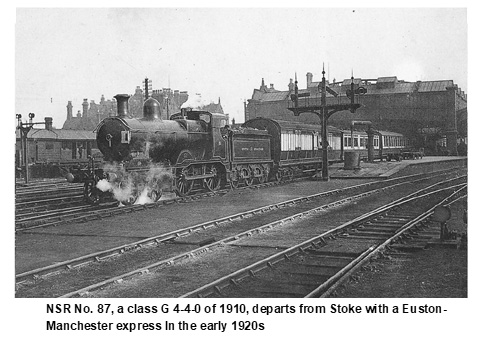 This short review does not do justice to Tommy’s efforts over the years, nor Brian’s since, and a much better idea would be to see the presentation in the flesh.