For the first Tuesday of February 2021 we had another Zoom meeting with a show entitled ‘Ramblings of a Head Station Master’ by Dave Boot, who worked all his life in the upper echelons of Joseph Lucas Ltd of Birmingham. He joined the GWSR at the start in 1982 and was Head Station Master for five years from 2014-19 and continues as Broadway Senior Station Master. He is a keen photographer and took his camera with him when he worked abroad, although there was not that much spare time in some places.

Section one covered 1948-82 and we started with shots around Smethwick Rolfe Street Station and Galton Bridge, which was where Dave spent his early trainspotting days. Born in 1937 he and his friends stayed locally until about ten-years old then went a bit further and meeting other spotters soon learnt where locos were etc. In the late 1940s and early 50s, the north end of New Street station saw congregations of spotters watching and photographing the action, though it seems that those at Snow Hill looked down on the LMS groups!

One of Dave’s first photos, taken on his Box Brownie, was of 46220 Coronation at Willesden in July 1951. In 1958 he saw his first Bulleid Pacific, whilst on his honeymoon, bagging a picture of 34036 Westward Ho!, though his newly-wed wife was not too impressed…

We then had views of Winchcombe Station in the late 1950s/early 60s, with some up to date shots for comparison.

Next was the smokebox number plate of 8F No. 48628, which Dave has on his shed, followed by a photo of it in full steam.

Tunnel Junction Signal Box, Worcester, was seen in 1954; a recent shot of 7029 Clun Castle was taken from the interior as it passed the box, where his grandson was the Signalman on duty that day.

On to Tyseley in late 1960s and 1970 where 5593 Kolhapur, Clun Castle and Flying Scotsman, together with the dreaded ‘Thomas’ Pannier Tank and B1 1306 Mayflower, were seen.

A Hunslet Saddle Tank attached to a breakdown crane was on the Swanage Railway in 1977, 71000 ‘Duke of Gloucester’ at Hatton in May 1983, also Earl of Merioneth a Fairlie/Patent at Porthmadog the previous August. At Dorridge we saw 92220 Evening Star, 35028 Clan Line and 4498 Sir Nigel Gresley.

Part Two took us to his overseas visits and we started in Argentina in November 1979, where just four photos were taken. The exterior of the main Belgrano station in Buenos Aires, then an approaching train; it was at this point that he felt a hand on his shoulder and turned to find a gun wielding policeman enquiring what he was up to. The official spoke broken English and he managed to get away by a bit of bluff. The other shots were of a signal (probably McKenzie & Holland), it resembled a Southern Railway one, and finally a level crossing showing an arm of the barrier across a bus with a train passing by.

Some Lisbon trams followed on 15th August 1984, not long after his visit to South Africa in March 1984. He travelled along the Johannesburg to Magaliesburg line, where we saw Class 15F 4-8-2 No. 3153 climbing Florida Incline on a special day tour, in the suburbs, Krugersdorp West (in the rain) and arriving in Magaliesburg. During the four hour wait there he caught it turning on the triangle ready for its return journey. Also shots of a 19D 4-8-2 arriving to go to Die Moot and returning. A couple of industrial engines at Crown Mines, Johannesburg, were seen.

In December 1981 he travelled to Malaysia and at Kuala Lumpur the railways were on strike, but he did get a shot of a diesel loco in the platform (KTM Class 22 Co-Co, one of forty built by English Electric in 1971) and another signal similar to the ones in Blighty. A couple of months earlier he had gone on a flying visit to India where the only snap taken was on the way to the airport, one of a 2-8-0 trundling through the countryside. July 1985 saw him in Hong Kong with some wonderful old trams of the double deck variety.

Whilst on a six month project in Auckland, New Zealand, Dave spent many of his weekends on the Glenbrook Vintage Railway (GVR). He gave a potted history of the line illustrated with several photographs followed by shots of London Transport Buses in the Transport Museum (MOTAT).

Added to this were several shots of ex-BR Mk.II coaching stock that had been converted into DMU and Electro-Diesel units working quite successfully between Auckland and Hamilton. These coaches with their smaller bogies on 3’ 6” gauge did not look out of place. He had obtained some pictures of a set going into service last month, whose introduction had been delayed due to Covid-19. 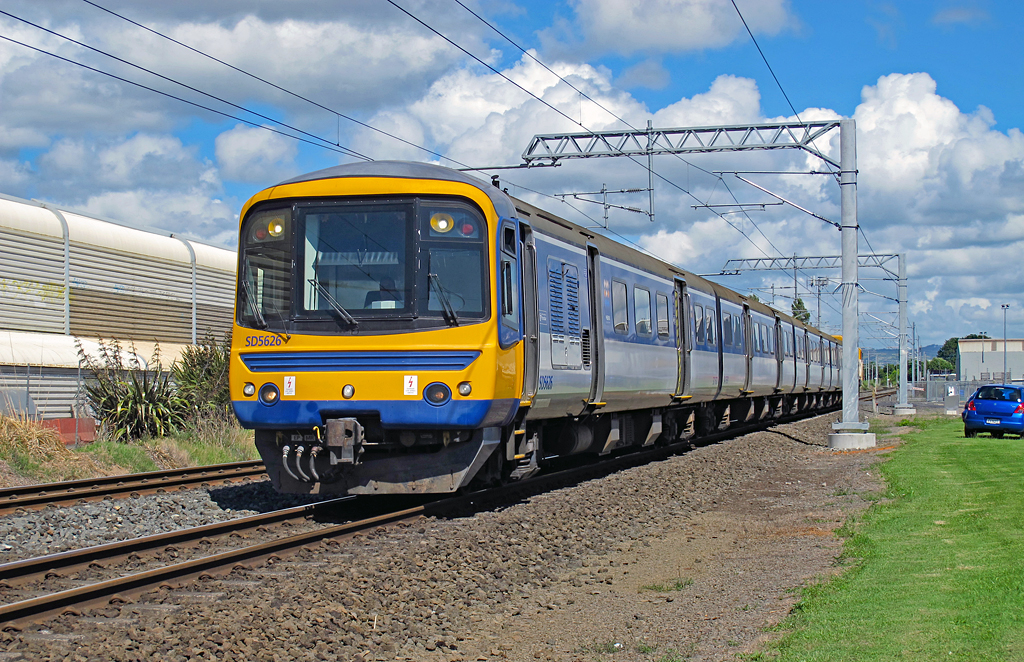 Ex-UK Mark 2 carriages converted in New Zealand, which were gutted and refurbished inside and out and new automatic doors fitted, placed on new Japanese-built 3′ 6″ bogies with smaller diameter wheels, and designated ‘SA’. The overall height was thus reduced by 250mm, and are now lower than the diesels that haul them (the loading gauge is only slightly less than the UK’s). They were used on Auckland’s suburban network until they were replaced with the new electric trains. Most of them now sit rusting at Taumarunui. Hillside Workshops in Dunedin undertook the conversion, and did an excellent job. The sets were run as push-pull, with an SD (converted SA with a driving cab at one end) and a remotely controlled Dc diesel locomotive at the other end, a configuration similar to the UK’s DBSOs. 3 SDs and 7 SAs have now been used to form a new commuter train between Hamilton in the Waikato, and Papakura (at the southern end of the Auckland suburban electric network), and which is due to commence shortly. So they live on!There is a lot of information about the carriages in Wikipedia (Google “NZ British Rail Mark 2 Carriage”).

After photos in the Austrian mountains was a fine shot of Prague Main Station, this was followed by a snap of a poster inside showing a small boy with a suitcase talking to the driver of B12 4-6-0 61555, which was rather bizarre but turns out to be connected with Sir Nicholas Winton’s Kinder Transport trains of 1939 just before the war taking children to Britain via Hook of Holland and Liverpool Street.

Next up was a ‘Guess where?’ and it was a Monorail train, no one guessed it was Disneyland!

To Switzerland and at Interlaken was the Berlin Express, also between the houses there and one at Wilderswil. Rack & Pinion Railway on the 1323m high Harder Kulm, Kleine Scheidegg, Jungfrau, Grindelwald passing loop. We saw rubbish being taken down underneath a cable car at Mürren, Grindelwald Grund Engine Shed, Pilatus Railway, and at Vitznau where the railway up the Rigi Mountain was seen.

A re-visit to Jersey saw him visit The Pallot Heritage Steam Museum, as well as standard gauge locos and coaches (not originally in Jersey), it has a narrow gauge railway forming a simple loop around a large paddock behind the main exhibition hall. 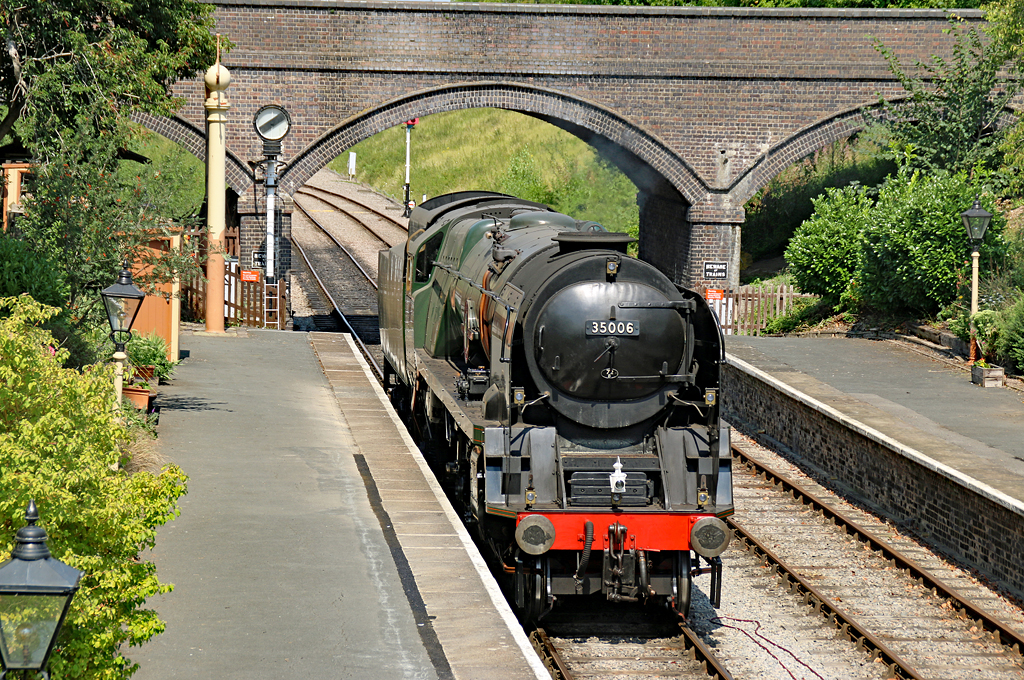 BR (S) rebuilt Bulleid 'Merchant Navy' Class 4-6-2 No. 35006 'Peninsular & Oriental Steam Navigation Co.' runs light engine through Toddington Station on the GWSR at 13:30 on Saturday 8th August 2020. It was working a trial run prior to the line reopening after the Covid-19 lockdown.

We finished an interesting evening off with some atmospheric pictures at the GWSR and some unlikely photos taken during Covid restrictions. Thank you to the 73 people who turned up and to Dave himself who was doing his first ever Zoom presentation.