For our 3rd November Zoom meeting we had a return visit from Branch Member Rob Freeman with a presentation about his past Rail tours he was either on, or in some cases linesiding, from the 1970s onwards.

A lot of the tours had comical names as will be seen.

‘The Grimsby Reaper’ was mentioned, though no photos shown, which unfortunately had to be curtailed on Immingham Docks as the rear Class 47 derailed and hemmed them in, so it was buses back to Doncaster and make your own way home!! 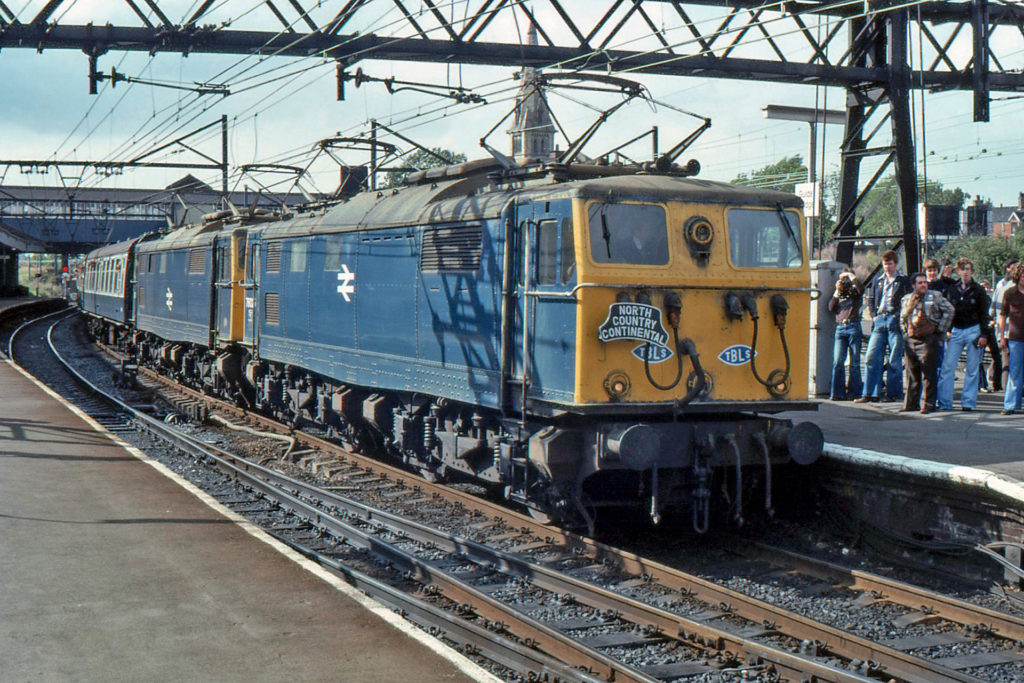 On 16th September 1978, The Thompson B1 Society ran the ‘Three Way Special’ tour from Marylebone, where we saw a typical DMU leaving for Aylesbury before the tour departed behind 25061 + 25245 as ‘The Master Cutler’ to Nuneaton, where we saw 40186 which took over the train as far as Rotherwood. A pair of Class 76s took over the train [76025/028] for the journey through the disused Sheffield Victoria station and the Woodhead Tunnel to Manchester Piccadilly, where we saw other 76s, and return to Rotherwood. 40186 then took the train onwards as ‘The North Country Continental’ to Harwich, passing through Ely where we saw a rake of condemned Mk.I Pullman coaches. The return run from Harwich ran as ‘The Scandinavian, to Liverpool Street, once again behind 40186

‘The Bramley Bunker’ was the next one which was a short hop from Basingstoke to Bramley then DEMU units 205033/026 on perhaps one of the most remarkable tours of (relatively) recent years. Three trips were run from Basingstoke around the former MOD Bramley Ammunition depot on Sunday 1st March 1987. This extensive facility with over 30 miles of track had opened in 1917 but these were to be both the first and last public trains before closure. Views of the units were seen as well as Army locomotives.

On 12th June 1983, the ‘Brunel Pullman’ was the next tour which was Bristol-Newport-Hereford-Worcester-Bristol and involved Class 47 No. 47500, LMS ‘Black 5’ No. 5000 and GWR ‘King’ No. 6000 King George V. We had shots of a busy Bristol Bath Road Depot, ‘KGV’ on Newport Triangle plus three run pasts at Abergavenny. At Bulmer’s in Hereford we saw 35028 Clan Line under restoration, No. 5000 on the tour train and at Great Malvern and Worcester, from where 47500 took them back to Bristol. 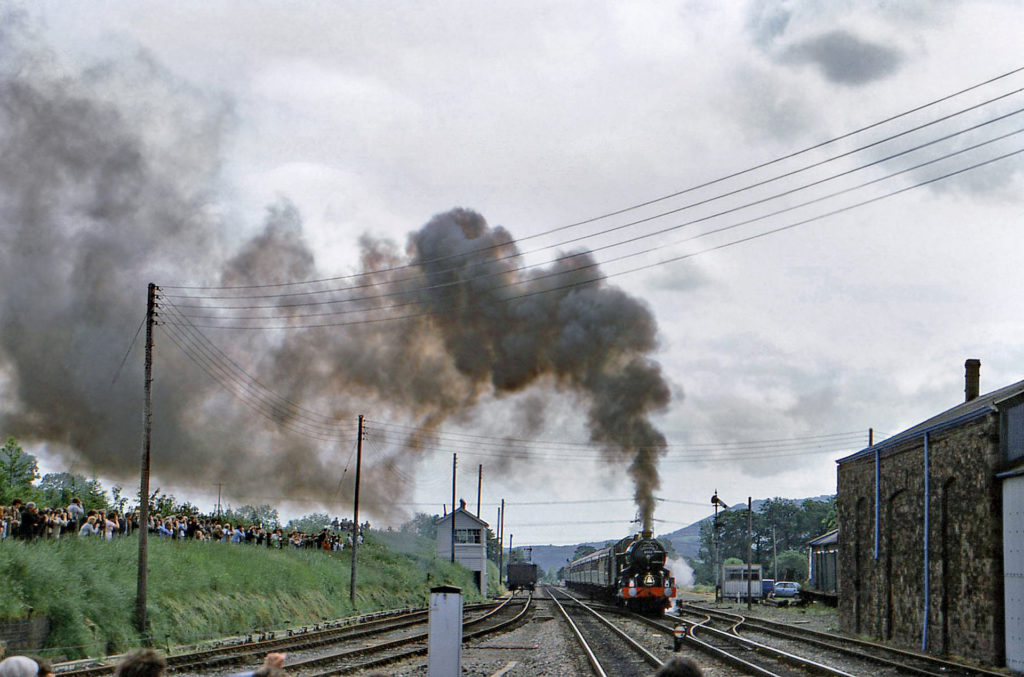 Next up was linesiding a tour called ‘The Chiltern Atmospheric’ on 16th May 1992 where he followed two Class 50s at Aylesbury, Princes Risborough and Maidenhead where we also saw Class 47484.

Back on a tour on 23rd September 1978 for ‘The Citadel Express’, run by The Merchant Navy LPS. We saw 35028 Clan Line at Skipton, Hellifield [where there was also a lovely photo of Rob himself with long hair and flares] and Armathwaite. At Carlisle we saw 25011 heading north on a Parcels train before a shot of the Class 85 Electric Loco which hauled the train back to Euston.

‘The Concrete Cow’ was linesided on 12th January 1985 organised by Hertfordshire Railtours, this was topped and tailed by 33106/33110 with 2 x 4TCs 401 & 421; these were seen at Aylesbury, Calvert and between Calvert and Bletchley.

Another linesiding trip was ‘The Crewe Avoider’ which went nowhere near Crewe, from Paddington-Morris Cowley-Reading West Junction-Hamworthy Goods-Fawley Ground Frame-Ludgershall-Paddington, we saw Class 56001 at Culham and on the Cowley Branch plus 37131/37107 were seen at Radley.

Rob took part on ‘The Deltic Dragon’ on 29th January 1978 with 55018 Ballymoss, this went from Paddington-Worcester-Cardiff-Treherbert-Gloucester-Swindon-Paddington. There was a stop at Evesham where we saw LT stock in the background, also Class 20030/20142 at Treherbert and Pontypridd.

A Joint tour by the SEG and RCTS was the ‘Devonian’ DEMU Tour and we saw 6-car 1014 at Yeovil Junction where we saw Class 50021 with a service train. 1014 was also shot at Meldon Quarry, Crediton, Newton Abbot, Heathfield, Paignton, where we also saw 2-6-4T No. 80064 on the steam railway, along with camping coaches at Dawlish Warren.

The 10th September 1983 brought us ‘The Fair Maid Pullman’ which travelled to Perth and back organised by SLOA. Rob travelled behind 86242 with his parents on this trip; a change of loco at Mossend to 47254, this hauled the train to Coatbridge Central, where A4 No. 60009 Union of South Africa took over. We saw it there, at Gleneagles, Perth and Markinch as it returned to Edinburgh Waverley where Class 47708 was photographed.

SLOA also organised ‘The Great Western Limited’ on 7th July 1985 from Paddington to Plymouth via Bristol. 47484 took the train to Bristol where this, a chocolate & cream-liveried DMU and GWR 4-6-0s 5051 Drysllwyn Castle & 4930 Hagley Hall were pictured, they later took the train on towards Plymouth. A photo of them at Taunton watering up before both steam locos stalled on Dainton Bank and had various attempts to get going without success. 50045 came on the rear and banked the train from MP 217 to 218 right by Dainton Tunnel signal box. 50045 was detached there then followed to Totnes where the train was terminated rather than running through to Plymouth as booked. At Exeter St. David’s a HST and a Class 50 were seen.

In Part 2 he went on ‘The Deltic Scotsman Farewell’ on 2nd January 1982 with 55015/55022 as the power with 55009 as back-up. It went from Kings Cross to Waverley and back, but photo opportunities were few and far between and a couple of shots of tops and sides of the Deltics among the crowds were all that was achieved.

‘The Grid Iron Grice’ on 7th August 1982 organised by DAA Railtours started from London Bridge-Clapham Junction-Brent Junction-Bedford. Class 56014 was seen at London Bridge to Bedford where we saw the 56 off and Class 45075 onto the train with 45110 heading down. We then saw 45075 near Harringworth Viaduct and Syston North Curve, off the train at Toton where 56049/56003 top and tailed to Redditch where we saw them both and also a DMU coming into the old bay road. The tour was also seen at Walsall where EMU 310 048 was pictured too. Further shots of the 56s at Leamington Spa and Bicester North ensued.

‘The Sou’ Wester’ involved a service train to Carlisle where we saw D200 and A3 Flying Scotsman which took the train to Annan where D200 dropped off. An unusual sequence of shots followed at Bridge 208, by MP 61½, of re-watering No. 4472. Further shots at Ayr where D200 took over the train with a final photo at Kilmarnock.

Another BLS tour, this time ‘The Wyvern Express’ on 23rd April 1983, which was a 6-car Class 120 DMU and shots were taken at Leicester, Glendon Junction, Kettering, Annesley, Nottingham Stabling Point, the Midland Railway Centre with Jinty 16440, also at Butterley, Shirebrook and Sinfin.

A BR organised tour called ‘The Western Tribute’ was run on 26th February 1977 to commemorate the end of this class. Locos used were 1013/1023 with 1010/1048 shadowing behind, just in case. Shots were taken of the crowds at Paddington, then Reading, an HST at Swindon, Bristol Parkway, Swansea, Dawlish Sea Wall, Dainton Tunnel and Plymouth.

3rd March 1984 saw another Hertfordshire Railtours entitled the ‘Goonbarrow Belle’. Class 50030 took the train from Paddington to Plymouth where Class 37182/37185 took over and we saw them at Plymouth, Lostwithiel, Carne Point [Fowey], Parkandillack, Bere Alston and Tavy Viaduct. Also seen was Class 50028.

53 attendees were kept entertained throughout and we look forward to Rob’s next talk, featuring photos from ‘The Casserley Collection’, which will be presented after the Branch AGM in January.