At Watford Branch we don’t normally have an August meeting, but because we are now having Zoom meetings we thought we would have one to make up for meetings lost earlier in the year. We decided to make it another ‘Members’ Digital Slides’, instead of trying to get an external speaker at short notice.

Humphrey Gillott gave the second half of his presentation on ‘London Transport, Chesham to Neasden, in the late 1950s and 1960s’, using black and white photographs that he, his brother Roland, and friend and Watford Branch RCTS Member, David Richardson, had taken during the late 1950s and 1960s as they grew up together in Northwood, Middlesex. This second half focused on photographs taken at Northwood and those that Humphrey had taken at Neasden L.T. Depot during a lunch-hour visit whilst working for Barclays Bank at Wembley Park in January 1964 (his first branch). His presentation included photographs of L.T. rolling stock at Neasden that had been made redundant on account of the introduction of the A62s. These included: Dreadnoughts, F, P and Q stock, also Bo-Bo electric locomotive Number 1 John Lyon. We were also shown a photograph of ex-GWR 0-6-0 Pannier Tank No. L94, which was working for L.T. and also F Class steam locomotive 0-6-2T No. L52 and E Class steam locomotive 0-4-4T No. L48. He concluded his presentation with his photograph of the nameplate from Metropolitan Bo-Bo electric locomotive No. 2 Thomas Lord (with crossed cricket bats) affixed to a heavy roller at Lord’s Cricket Ground, and his photograph of a painting by Berkhamsted artist Mary Casserley, of one of her grandfather’s (Henry Casserley’s) photographs of Chesham station in steam days.

Bernie Holland then showed photos of a Brake Van trip on the GWSR from Toddington to Cheltenham Race Course from the rear of the train, hauled by GWR 0-6-0ST No. 813. This included stations, bridges, tunnel and locomotives and also a 12 question quiz of the journey – which I happened to win, but I am a full time volunteer there, so perhaps not a surprise!

The ‘Nosey Peaker’ tour was an excellent day out with the Branch Line Society, on 14th June 2018, utilising the stock for the ‘Three Peaks Challenge by Rail’ prior to its departure for Snowdon, Scafell and Ben Nevis. It featured haulage by three DRS Class 37/4s, Nos. 37424, 37407 and 37401 in Top & Tail mode and all in BR Large Logo Blue livery – itself a triumph of organisation! The train was run by the BLS raising funds once again for the Railway Children charity, in association with DRS, Riviera Trains and Network Rail. We started out with the ECS arriving in Stafford from Burton Wetmore Sidings, then on to Crewe where the train reversed and visited Crewe PAD Line 2 with views of the DRS depot at Gresty Bridge, The train was only able to be half-full, as much space was taken up by fresh provisions for the mountaineers later in the day, and scenes of food preparation included the many bacon rolls being produced for ravenous track-bashers! Amongst on board fund-raising efforts was an auction to win a cab ride, the winner boarding the leading loco at Manchester Victoria. A stop was made at Denton and Geoff was able to ride from there in the rear cab of 37401 on the rear of the train in order to photograph the route taken and also shots at various ground locations where the train stopped or reversed. 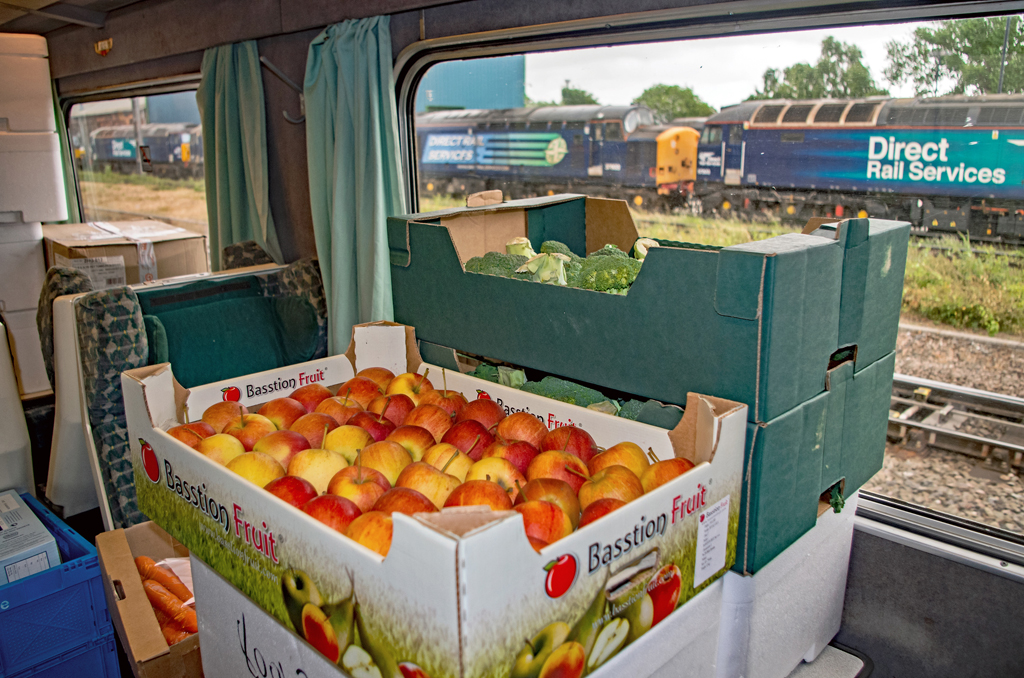 At Crewe station it had been all-hands on deck to load provisions for the "Three Peaks Challenge by Rail", starting from Crewe later in the day after the BLS "Nosey Peaker" had fiinished its tour. Until it could be stowed away, a couple of coaches were filled with healthy looking goodies (no junk food for the climbers!), here are a few them, seen as the train makes its way past DRS's Gresty Road depot after its reversal in Crewe PAD No. 2 Road. Locos to be seen include 37603 and 57303, 57003 visible through the further window. 09:29½, Thursday 14th June 2018. Digital Image No. IGMP38069.

An onboard organisers’ conference took place as part of the intended route at Buxton Station was blocked by a stabled Northern unit, so a new reversal point was negotiated with Network Rail on the Hindlow branch instead. From Heaton Norris Junction through Stockport and then up the line to Buxton, through Hazel Grove, Furness Vale, Whaley Bridge and Chapel-en-le-Frith, then onto the Hindlow line at Buxton. Reversal was at a very rare Fixed Home semaphore signal, all movements controlled by a ground disc signal. The train then ran into the ‘X, Y and Z’ sidings alongside the line to Manchester, where it reversed again to take the line through Ashwood Dale. Views were seen of one of the big industrial shunters in the quarries at Tunstead and Freightliner 66s stabled in the sidings at Great Rocks Junction, the final shot showing the approach to Peak Forest.

Jeremy Harrison’s presentation was images of British standard gauge steam, taken since last March. Many were taken on photo charters – starting with the Severn Valley Railway, there were also visits to the Gloucestershire-Warwickshire, Mid Hants, Isle of Wight Steam, Great Central, Dean Forest, Swanage and Epping-Ongar Railways, and the Battlefield Line; and also shots taken on the main line, including of 60103 Flying Scotsman, 35028 Clan Line, and 61306 Mayflower working the ‘Royal Windsor Steam Express’. While steam came to a sudden halt back in March, it is now resuming, so Jeremy was a able to conclude with shots of 41312 working a pre-reopening refresher train on the Mid Hants, and a charter with 6412 on the Chinnor and Princes Risborough Railway – which did not stop play at the Bledlow Village Cricket Club.

We finished with William Shelford showing a visit to Stoomcentrum Maldegem, literally Maldegem Steam Centre and is a heritage railway located at Maldegem in northern Belgium. It is located at the former NMBS station. Standard gauge trains run on the line to Eeklo, where the SCM has its own station. It is half a mile from the Dutch border. There was a mixture of Industrial and main line steam as well as narrow gauge which featured Peter Pan and Challoner.

Another excellent evening with an attendance of 24 although 29 had registered and a big thank you once again to David Jackman for arranging it all.