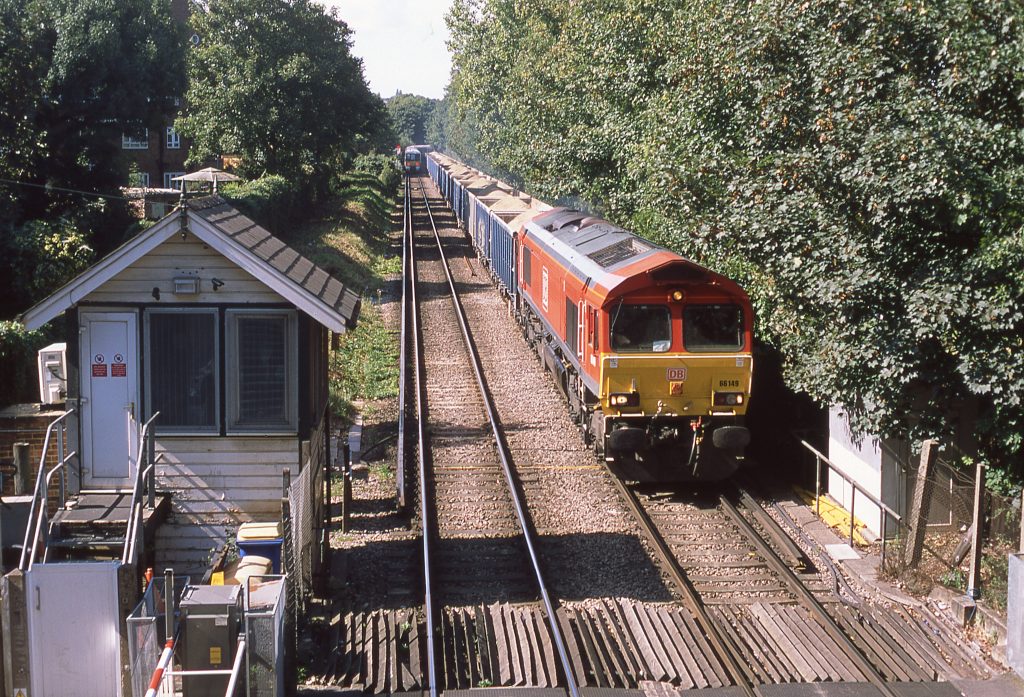 The Capital’s railways were the subject of our November meeting, when Geoff Brockett took us on a tour of Greater London, focusing on new and unusual workings since February 2019.

Underground workings were first to be covered, starting at Geoff’s local station of South Woodford with a five car Rail Head Treatment Train. We then saw 72 stock on the Bakerloo at Stonebridge Park, Metropolitan No. 1 in the ‘Steam on the Underground’ celebrations at Ealing Broadway, Sarah Siddons heading from Eastleigh to Ruislip Depot and the beautifully preserved 38 stock at West Ham.

Next we turned to buildings and saw the last example of a North London Railway station building at Camden Road, the former coal drops at Kings Cross and the nearby former gas cylinders at St Pancras, whose frames now contain cylindrical blocks of flats!

The passage of time was vividly brought home as Geoff showed views from the 1990s which included 62 stock on the Central line, a class 86 at Stratford on a Norwich service and the delightful semaphore signaling at Addiscombe – all now very much a distant memory.

Illustrating just how much has changed in London in recent years, Geoff then covered the routes out of the Capital in all directions. Highlights included the last HST workings at Paddington and on the Midland Main Line, new class 710 units on the Tottenham & Hampstead, the DC Lines and the Great Eastern, new class 745s on the Great Eastern, new class 707s and Azumas on the Great Northern, last workings of the unfortunate class 442s and new Thameslink class 700s (seen passing the last conventional-style signal box in South London at Charlton Lane).

The diversity of stock movements was well illustrated with Rail Operations Group (ROG) class 37s moving class 345s from Old Oak Common to Ilford via the North London Line, ROG class 60s bringing Chiltern coaching stock back from repair at Barton Hill onto the Great Central at Neasden and Greater Anglia class 90s at South Kenton returning from overhaul at Crewe to Norwich, hauled by DRS class 37s. New London Overground class 710 units were seen travelling from Old Dalby to Willesden as were LNER Azumas heading to Eastleigh for the application of vinyls. The other side of the coin was then pictured with withdrawn class 91s, 313s, 317s and 321s heading to Newport Sims yard for breaking up.

Freight movements were covered with pictures including the Northolt to Severnside waste at West Ealing, a class 90 hauling Ford vans from Dagenham to Mossend at Blackhorse Road, the Wentloog to Felixstowe freightliner at Caledonian Road and a wonderful view of a DRS class 88 heading down the City Goods Lines at Willesden Junction on a Dagenham to Garston Ford cars working.

Several charter and steam workings were then covered, culminating in the final shot, some way from the Capital, of 38 stock at Ryde Pier Head on the Isle of wight.

The meeting closed at 9.45 pm with a vote of thanks and appreciation to Geoff for a wonderful evening of excellent photography and informed comment on London’s railways today.