On November 10th our guest was Robert Warburton to present a DMU Miscellany. The original units were introduced by the Great Western in the thirties but under the 1955 Modernisation plan many different types were procured with the locally based Derby Lightweight and Met-Cams amongst the first batch although they were all withdrawn by 1970. Other classes, of both low and high density capacity introduced from the late fifties were featured with some lasting until the Sprinter Revolution of the mid eighties or replaced by electrification.

A few were converted for parcels use and others observed in hybrid formations in a variety of liveries and perhaps away from their original area of operations. Some preserved units are now an integral part of heritage railway operations. The Sprinter revolution featured many new classes, mainly built by BR and can still be seen on the network today although the much maligned Pacer units have gone. Upon privatisation many new units from classes 168 onwards were constructed to cope with an increase in passenger numbers and replace loco hauled stock. 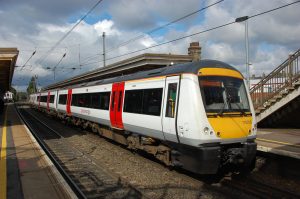 The Southern Region DEMUs were also seen together with the original Blue Pullman sets but these too have gone. Finally the 1970s HST sets, and more modern Voyagers, Merdians and Adelente units were shown in various liveries all of which still feature on the network today. A thoroughly enjoyable presentation.