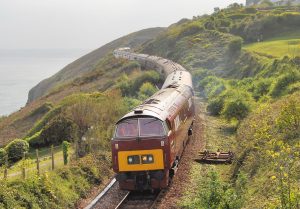 The talk concentrated on Cornwall, starting with the crossing of the Tamar on the Gunnislake branch.   Several slides showed the different types of stock used.  We then moved on to the Liskard and Loo branch, showing both passenger and china clay traffic.  We proceeded onto Falmouth docks again with china clay showing Class 37 and more modern class 66.  We then visited Truro and Redruth which is still in the original condition: it must be the only station in Cornwall in this condition.

Stuart then moved onto Penzance passing the shed at Long Rock; Penzance termini had both passenger and postal trains.  We were also shown current HST Castle class trains running between here and Swansea.  Several shots of the night sleeper also showed current trains.  There was a picture of oil tanks taking fuel to Long Rock for locos, sad to report this is now done by road tanks nowadays. A small selection of pictures showed the Bodmin and Welford Railway.  Several heritage steam locos were shown, including the Beatie Well tank and T9 440 No 120.

During the talk we saw shots of classes, 150; 153 and 158 Mainline.  Liveries seen were Regional Railways First ALPHA line and Midland Mainline.  There were shots of semaphore signals and am inside shot of a mechanical signal box.

A very enjoyable talk and well recommended to other branches if they get the opportunity.

After his presentation Stuart signed copies of his latest book, ‘The Journey’.