Chris Wilkinson from the Worcester Locomotive Society came on 18th November to present some images of Worcestershire Steam 1950-1964. Centred on the City of Worcester we travelled out on the still live lines and saw images from closed lines. Locomotives and wagons in industrial settings, including the coal hoist at Worcester Depot – long gone of course, but the track is still there encased in tarmac. Chris highlighted many of the characters who worked on the railways, including the ‘forward only’ donkey. Locomotives represented:- a Kirtley 4-4-0 from 1870, a Dean 4-2-2 from 1890 still working in the early 1950s, as well as more modern Stanier, Fowler, Dean, Churchward and Collett locomotives. Diesels were seen in the early 1960s along with GWR railcars and Derby, Gloucester, Leyland ‘modern’ DMUs. Architecture, the huge 1870s Worcester Engine Works building still exists. At Ledbury the solid cast iron footbridge erected on the platform had a circular hole cut in it to allow the signalman sight of the signals at the Hereford end. In the 1960s British Rail erected an illuminated ‘double arrow’ sign at the entrance to Foregate Street station. This did not sit well with the City Council and BR was instructed to remove it. It is still in place 50 plus years on! A superb evening of railway memories from just up the road. 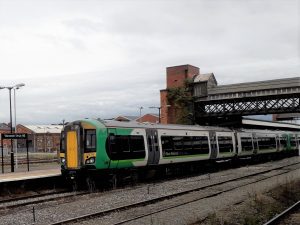