RCTS Watford Branch members and friends assembled on the ZOOM platform on Tuesday 1st September for Bernie’s presentation which was dedicated to the memory of acclaimed railway photographer Bill Potter. Starting with a sequence of black and white slides we saw views of the line taken in both the GWR era followed by that of British Railways Western Region taken by a number of photographers including Bill Potter, Humphrey Household, Joe Moss, Roger Carpenter, Dick Riley, and Michael Mensing. This was followed by a sequence of colour slides from the Bill Potter Collection, dating from the 1950s up until the final steam working with 7029 Clun Castle from Paddington to Cheltenham Race Course in March 1968. 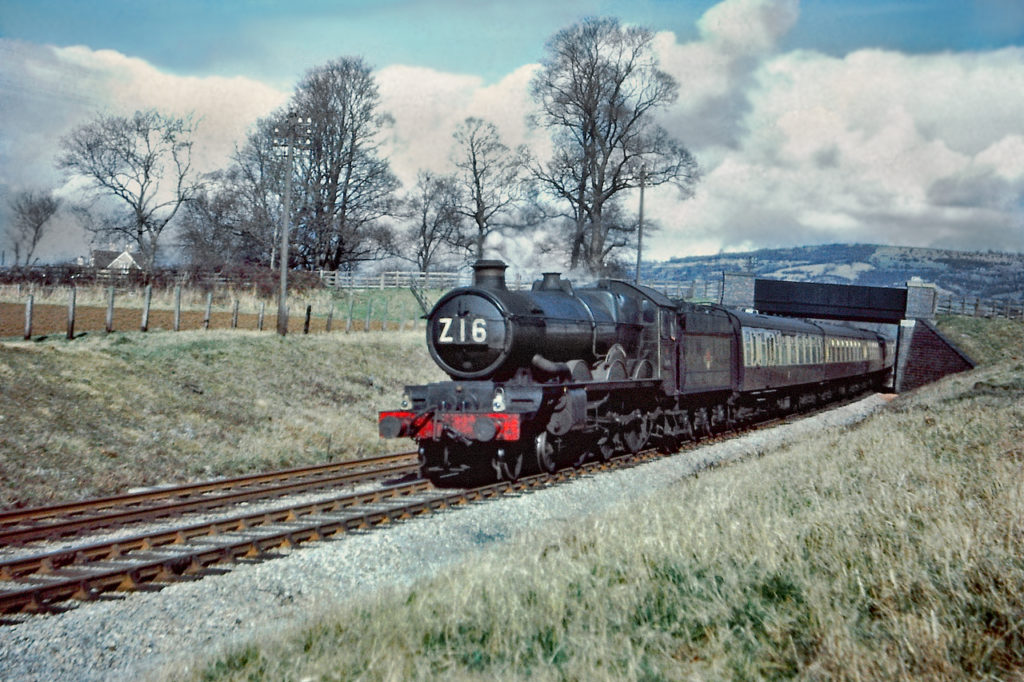 GWR 'Castle' Class 4-6-0 No. 5046 'Earl Cawdor' heads (1)Z16, presumably a special of some sort, along what is now part of the Gloucestershire Warwickshire Steam Railway on Wednesday 14th March 1962. It is passing under the Southam Lane bridge on the approach to Cheltenham Race Course station and this may have been a Gold Cup special.

The next section of the show dealt with the restoration and developments from 1981 to 1988. Further progress from 1990 saw the continued extension of the line south to Cheltenham Race Course in 2003, and north to Broadway in 2018 featuring a wide variety of steam and diesel locomotives which appeared at various Steam and Diesel Galas.

The often overlooked North Gloucestershire Narrow Gauge Railway was also featured. Case studies were made of two GWSR residents, GWR 2-8-0 No. 2807 and Bulleid Pacific No. 35006 Peninsular and Oriental S.N. Co. The next objective of reaching Honeybourne and making a main line connection was also considered, although the £20m cost at 2019 figures means this may never happen; then followed a short sequence of slides of Honeybourne Station from its closure and dereliction to its reopening and refurbishment.

The final section of the show was given over to the subject of Gotherington Station, its history and renovation including various events, from the sublime to the ridiculous, that have taken place there over the years. For this final part of the show, the owner of Gotherington Station, Mr Bryan Nicholls was present to contribute to the commentary. At the conclusion of this show a short question and answer session was conducted by Bernie, with the assistance of both Bryan Nicholls and Rob Davidson.

The attendance of 31 walked away happy and were very thankful for Lizzie’s virtual tea and cake!