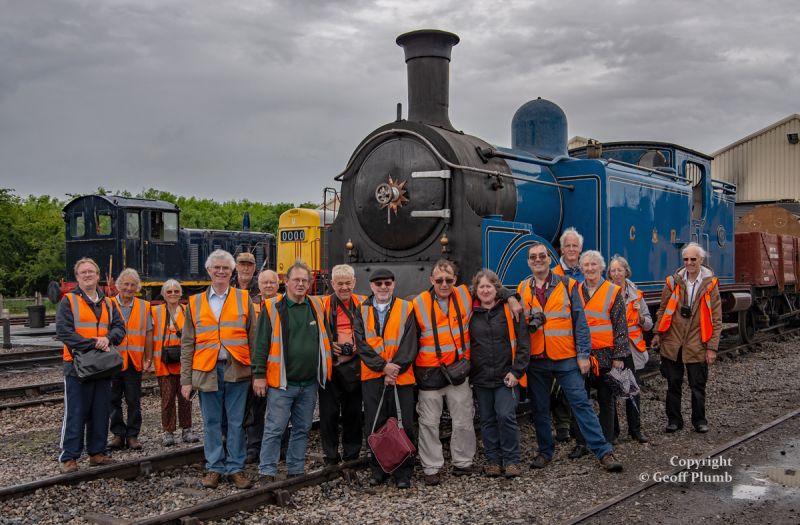 Members of the RCTS Watford Branch group pose with McIntosh Caledonian Railway ‘439’ Class 0-4-4T (aka ‘Standard Passenger Class’) No. 419 in the shed yard during a guided tour of the loco shed and facilities at Toddington on the GWSR. 13:11¾, Sunday 2nd June 2019. The loco was not serviceable after a failure, though a wonderful sight! Photo © Geoff Plumb

On Sunday 2nd June 2019 I organised a full day out on the GWSR and along with myself there was a healthy attendance of seventeen members and visitors.

We met at Toddington Station ready to board the 10:00 service to Cheltenham Racecourse, some turning up as early as 09:00 to catch the early scenes and shunting of loco’s.

The ‘Cotswold Express’ was duly caught (so called because it does not stop at Hayles Abbey or Gotherington). Unfortunately, the cook’s duty on the train was uncovered for the first time this season so no bacon rolls, but large toasted tea cakes were still on the menu, slightly healthier I suppose. We were pulled by B1 1264 which had stayed over from the previous weekend’s Steam Gala and we all got out to witness and photograph the run round and departed at 11:05. This was again the ‘Cotswold Express’ (Steam 1 is this all day) and alighted at the next stop, Winchcombe, to have a look around the Carriage & Wagon Works where we saw 3 carriages in various states of repair, including the paint shop where a DMU car had just been finished off. Next, we visited the Signal Box where the very friendly Signalman gave us a talk about the box and nearly everyone had a pull of a lever or two. Boarding the 12:38 3-car DMU we went one stop to Toddington where I led our Steam and Diesel Shed and Yard Tour.

We boarded the 13:50 to Broadway hauled by GWR 4-6-0 6023 King Edward II which was noted running round and we re-boarded the train which formed the 14:30 to Cheltenham Racecourse. We travelled to Gotherington Station for a special visit around the privately-owned grounds where Bryan Nicholls and his wife Savita made us welcome with tea and biscuits. We had a close look inside the signal boxes, other buildings and rides on the Wickham trolley. The platelayers pump trolley was pumped up and down the 150-yard siding with the ensuing aching muscles afterwards!! After due thanks to our hosts we boarded the 16:26 to Toddington where most got off and went home but six hardy souls went to Broadway and back for a last ride.

Everyone had a great day, although the rain was about during our Winchcombe stop, and I shall be repeating it next year.