We welcomed back former Branch Chairman and Secretary Bernie Holland to host his show by Zoom entitled ‘THIS IS LUXURY I CAN’T AFFORD’ for which we had a total of 93 attendees, a record for Watford. Also we had a friend of Committee Member Larry King who joined us from Albuquerque, New Mexico, which beats last month’s one from New Jersey.

Before we started, Bernie told us that Geoff had won a prize from a while back and that he would receive it tonight. This was the ‘Virtual Brisling Transfer’ that was witnessed, live on ZOOM, when, after a delay of several months, Bernie was able to pass a tin of Wood Smoked Norwegian Brisling across the ether, from Harrow Weald to quiz-prize winner, Geoff Plumb in Haddenham, much to the amusement, or bemusement, of the record audience!

In all, a total of 173 photographs were shown with the majority featuring Pullman Trains with the likes of VSOE, Harrogate Pullman, Brighton Belle, Northern Belle etc.

We started with the new Blue Pullman HST with 43055 and 43046 at Headstone Lane, Linslade and Sutton Bonington. 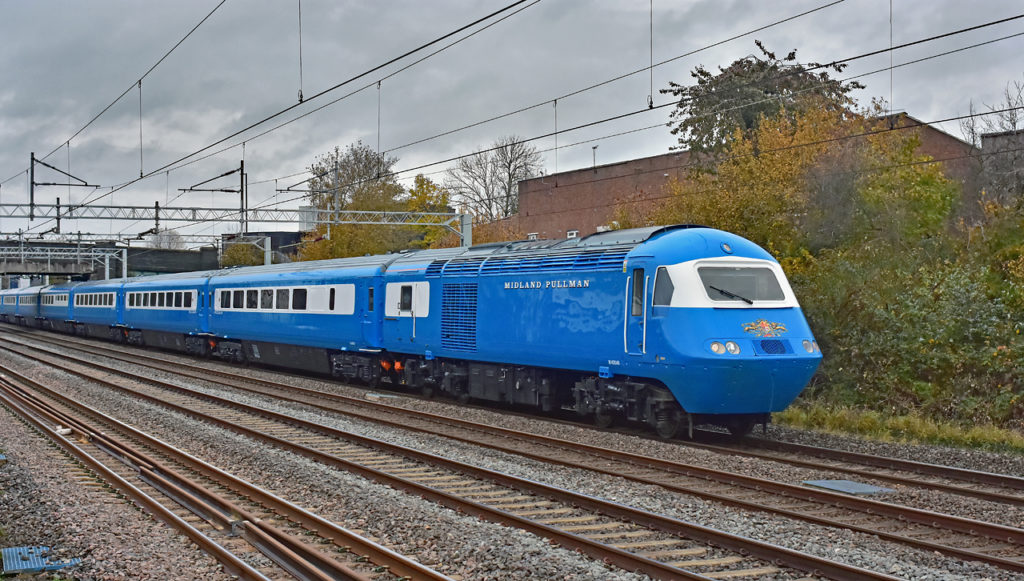 The HST set newly refurbished into Midland Blue Pullman livery, with 43046 leading and 43055 on the rear, heads south along the up slow line at Headstone Lane, working 5Z36, the 06:32 from Crewe Holding Sidings to Eastleigh Arlington Works, on the rather dull morning of 11th November 2020. Photo taken during a lockdown exercise walk!

On to a portrait of George Pullman [1831-1897] who was a Millionaire by the age of 30. His Pullman cars were originally called Palace Cars and were built just to the south of Chicago, in a town called, yes you’ve guessed it, Pullman!! Its production workers lived in a planned worker community similar to Swindon, but he was a bad boss like a feudal Baron and ruled with a rod of iron.

Pullman developed the sleeping car, which carried his name into the 1980s. Pullman did not just manufacture the cars, it also operated them on most of the railroads in the United States, paying railroad companies to couple the cars to trains. The labour union associated with the company, the Brotherhood of Sleeping Car Porters, founded and organized by A. Philip Randolph, was one of the most powerful African-American political entities of the 20th Century. The company also built thousands of streetcars and trolley-buses for use in cities. Post-World War II, changes in automobile and airplane transport led to a steep decline in the company’s fortunes. It folded in 1968, with a successor company continuing operations until 1981.

We then saw a diagram of the luxury cars with French Rococo insides and gold plated taps, there were over 2,000 private cars and they all had rebated end doors.

We saw The Harrogate Pullman, Bournemouth Belle, with The Brighton Belle outside Victoria and at Brighton and The Golden Arrow which originally had 10 1st Class coaches before changing to 1st and 3rd.

The Bristol (Blue) Pullman was seen in 1960 at Iver on the Up and at Temple Meads. The Birmingham Pullman was seen, also in 1960, its daily diagram was Wolverhampton LL-Paddington-Snow Hill-Paddington-Wolverhampton LL. These were built by Metro-Cammell. Later on they were painted mainly corporate grey and a set was seen at Newport with 4 cars of grey and 4 cars of original blue.

The Manchester Pullman was seen on Camden Bank hauled by a Class 86, followed by a great shot of a working going across the low viaduct of Folkestone Harbour, another being pulled by a Class 47 at Acton Wells Junction, with another Cl. 47 on The Northern Belle at Twerton Tunnel.

86233 was at Euston P12 in September 2002, then during the same week at South Kenton, Harrow & Wealdstone, Headstone Lane, Carpenders Park, Watford Junction and Rugby, shortly after it was sent to Bulgaria to be broken up for spares.

Bulmers Ciders of Hereford bought five cars to run with 6024 King George V and this was seen at Hereford, Brighton and Dinmore Tunnel.

The ‘Great Eastern Pullman’, a special hauled by Class 86’s, whose diagram was Liverpool Street-Southend Victoria-Shenfield-Clacton-Liverpool Street was photographed at Southend.

Another shot of Folkestone Harbour this time with VSOE pulled by Taw Valley, passengers continuing to Venice where for just over £2,000 you could travel with a sleeping car and food on the 24 hour journey.

47736 was seen at Staines coming back from Royal Ascot.

Centenary Pullman with VSOE stock with a Deltic pulling it from Victoria to Temple Meads was photted at Victoria and Bathampton. The same stock was snapped at South Croydon on a Victoria to Brighton run with 73101.

47734 with a Pullman Special at Harrow & Wealdstone to The Grand Prix at Silverstone.

‘Pride of the Nation’ 4 day Railtour followed from Paddington to Totnes-Temple Meads for the night then to Glasgow where 90036 took over at Crewe. The third day was to Mallaig and Fort William then back to Glasgow with 37426. On the 4th day it was from Glasgow to Kings Cross by 90036, all organised by Hertfordshire Railtours.

VSOE at Carlisle, then 47778 with the Riviera Stock was seen at Acton Main Line on a Victoria to Bath and also Tangmere was seen near Warminster with the same working.

37051 was seen near Longcross with another Royal Ascot train.

We then saw some interior shots of these fine carriages with armchairs, carpets, inset mirrors, wood panels, logo, and fully laid tables.

08834 was seen shunting PEGASUS whilst at Olympia we saw the VSOE with Flying Scotsman and later Taw Valley and at St. Annes Park Tunnel we had 47786 ROY CASTLE OBE and over to Headstone Lane for 66705 with The Golden Jubilee and various stock on the way to Crewe.

Tangmere was seen with the VSOE at Lower Basildon and at Welwyn North the Blue Pullman was on the way to the SVR from KX.

47712 Artemis in 2006 at Gladstone Park, at Harrow & Wealdstone with a Euston to Chester and also near Winchfield with a Victoria to Salisbury working of the then new ‘Blue Pullman’ formed of converted Mk.II stock.

Stobart Pullman with 47502 working a Letchworth to Stratford-upon-Avon train at Welwyn North and also a KX-Norwich. Clan Line with VSOE at Chertsey and Old Oak Lane with a Victoria to Shelford Circular. VSOE also seen again at Folkestone Harbour, Skegness, near KX, Newton Abbot and Dover.

The Great Western Pullman was snapped at Paddington and Taplow with the Cathedrals Pullman near Lydney.

Met. Rly Sarah Siddons was seen at Wraysbury with a Staines to Windsor shuttle, whilst Duke of Gloucester was spotted near Oxford with the ‘Red Dragon’ from Didcot to Derby, then down to the Weymouth Tramway with a Class 37 being walked along the road.

37431 was in charge of a Regency Rails train from Kyle to Temple Meads and another tour from Finsbury Park to Sheerness was seen at Shakespeare Tunnel. 37055 and 31452 were passing Sutton Bridge Junction with a Lancaster to Cardiff. The disused station at Bredon was the venue for 37401/37417 with a Pathfinder tour from Cardiff to Ravenglass and to the east at Iver there was 6024 King Edward I with a Paddington to Yeovil VSOE and 37516 was pulling another VSOE at Seamer on a Leeds-Scarborough.

On the Surrey Hills circular we saw 37417, then Tornado at Wandsworth Road, Duke of Gloucester at Barnes and Egham, 67026 at Virginia Water and Clan Line at Mortlake. Meanwhile Earl of Mount Edgcumbe was spied at Headstone Lane. 57001 was spotted at Heyford on a Preston to Temple Meads.

Our final VSOE was seen at Sydney Gardens with Tornado on its way to Temple Meads from Victoria. Our last photo was 20142 Sir John Betjeman at Hatton with a BLS tour entitled the ‘Birmingham Balti Bash’. 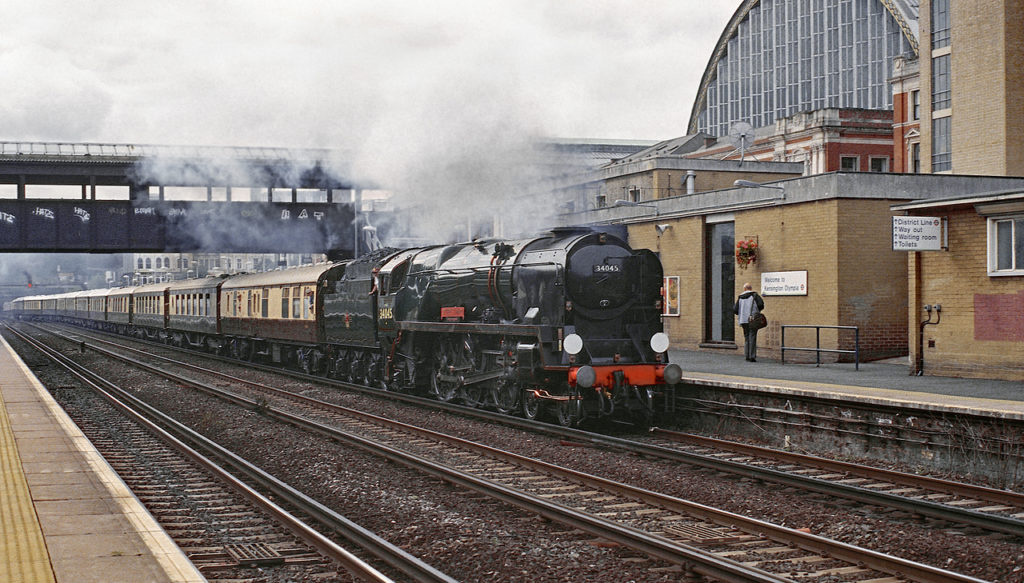 We finished with time to spare and had a good chat, big thanks to Bernie for an excellent presentation and once more to David Jackman for organising the zoom part.