On the 3rd February the Milton Keynes Branch were educated and enlightened about the history and operation of the rail network around Portsmouth by local member Mark Richards, who was born and brought up in the city that is home to the British Navy. Mark took us through the growth of the rail network and the city’s topography – Portsmouth is situated on an island and early plans for a bridge across Portscreek caused some misgivings at the Admiralty, afraid that it might undermine the port’s defences. 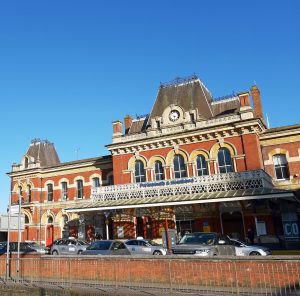 Mark described the architecture and operations of the two principal city centre stations, Portsmouth and Southsea and Portsmouth Harbour, along with the other major station at Fratton. Long lost branch lines were not ignored with the Southsea branch succumbing to tram competition. Next was a look at the development of railways across Portsmouth Harbour in Gosport, a victim of the early loss of its passenger service in 1953 and goods facilities in 1969. Mark showed some excellent images of Gosport station and its exquisite architecture, that stood derelict for decades but has been restored to its former glory. Also illustrated were the branches off the Gosport line to Lee on the Solent and Stokes Bay.

Equally absorbing were the remaining evidence of the “industrial line” to the Docks, known as the “Admiralty Line”. It gave some indication of the importance of the Naval Dockyard to the city’s economy in years gone by. Mark also found time to show examples of Naval history berthed in the Dockyard, along with Isle of Wight ferries that provided much traffic for the Harbour station.

All in all a fascinating and informative evening on a part of the rail network that rarely features in the railway media.