This is the time of year for our Branch AGM and we had 23 Branch members in attendance as well as quite a few visitors. There were apologies for absence from two members. The usual formalities were gone through and the current committee was re-elected en bloc, with nobody else stepping forward to join the committee.

After the AGM we welcomed Branch member Rob Freeman for his presentation of photographs with ‘Gems from the Casserley Collection’. Rob said: “While writing the sequel to ‘Steaming Through Berkhamsted’ for Mary Casserley, granddaughter of H C Casserley and daughter of R M Casserley, I have been granted access to some of the vast collection of photos taken by these two venerable photographers. This presentation will show some of my interesting discoveries which Mary has given me permission to show us. There will be photos from around the country, as well as those of local scenes. The period covered will be 1920s to early 1960s”.

Just as we were about to start the AGM Rob let us know he was having problems logging-in to Zoom on his computer (he initially joined via his mobile phone), but he had it sorted by the end of the AGM.

The presentation was divided into regions of the British Isles as follows,

1. ‘Coronation’ Pacifics at Berkhamsted, streamlined and after, including some wartime shots (example below). 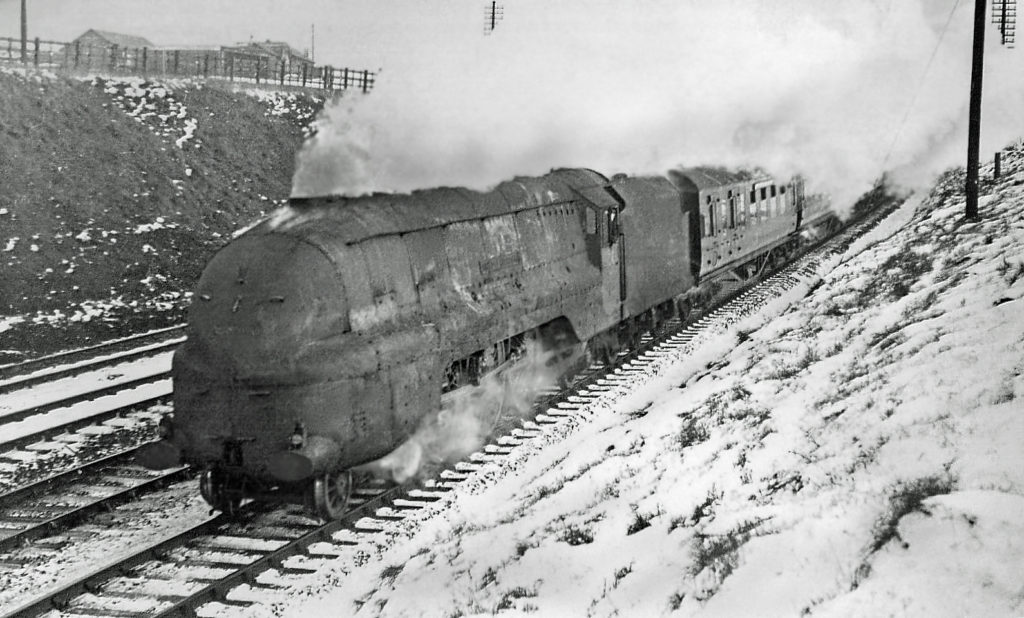 3. Unrebuilt ‘Merchant Navy’ Pacifics, some brand new. Gave a glimpse of what the future re-unrebuilt 21C 11 might look like.

4. Great Eastern and branches: a packed Stratford shed, Central Line before it was such, Brentwood Bank with streamlined B17 4-6-0 City of London and a B12 pounding up on parallel trains, Tollesbury branch train.

5. Diesels: many of the short-lived types were featured, plus a Brush Type 4 on its first day in traffic, at Glasgow Buchanan St.

6. Woodhead Route: from Manchester to Sheffield before and after electrification. EM1+EM2 double heading a train. Even a photo taken from inside one of the old Woodhead Tunnels, whilst still in operation!

A very interesting evening which was enjoyed by 59 members and guests with plenty of questions about the subjects, with Rob presenting in his usual enthusiastic style.