It’s July and that means only one thing at Watford, the eagerly anticipated presentation by our Branch Chairman Geoff Plumb with another in his evocative series of ‘That was the year that Was’ this time it’s 1962 which is the earliest of all the years he has done, he was too young before that to take all the photos needed.

We started off with the obligatory one of Geoff on the footplate of 1P 0-4-4T 58077 in April 1953 when little Geoffy was just four-years-old on a joint SLS and MLS tour to the Cromford & High Peak Railway where we also saw a LNWR 0-6-0T at Cromford, Middleton Top and Longcliffe. Moving on to Heeley Station we saw a GN Atlantic and a Director and LNER 61554 at Dore, with the original Royal Scot at Elmhurst Level-Crossing.

Also in the 50s at the Festiniog Railway was No. 2 Prince at Portmadoc.

Over to the IOW with trains at Cowes and Ryde St. Johns Road, then for a few shots at the Weymouth Tramway where we saw 0-6-0PTs 1367/8/70 and a V2 among others at Essendine on the ECML. At Newhaven Town we saw H2 32424 Beachy Head and Adams 4-4-0 563 in LSWR livery at Brighton shed. A T9 was at Eastleigh along with Terrier 32661 whilst along the line at Southampton Docks was a quaint C14 0-4-0T No. 77s which had to be used as the replacement Diesel shunters couldn’t get around the tight curves.

Next up was a Dukedog on Barmouth Bridge with a young girl keeping as far away as possible from the engine while walking along the bridge footpath and onto Barmouth itself which was very busy with locomotives. Further up the Cambrian Coast Line we popped into the FR where a Double Fairlie was seen at Tan-y-Bwlch.

A Scottish Tour was undertaken and most of the major former railway companies were seen with CR 0-4-4T at Forres, GNS 62277 Gordon Highlander at Banff, a NB Pug Class G (Y9) 68123 at Dundee and a CR 0-4-0ST 56025 at St. Rollox. Back down to Northamptonshire a branch line tour with 45091 and was seen at Northampton, Byfield, Culworth and Napton & Stockton, before returning to Scotland for more minor lines where a J36 was seen at Fort William, also the HR Jones Goods No. 103 at Inverness.

Up to London we saw a great shot of Met. Electric No.2 Thomas Lord (previously Oliver Cromwell) at Finchley Road Station heading North to Aylesbury although it will leave the train at Rickmansworth where in a slick move of just three minutes it was exchanged for a steam loco.

Visits were then made to Derby works and 58175 was seen and among others at Swindon Works was Manor 7824. Over to Kent he saw Schools Class 30935 at Margate, City of Wells at Dover and a Maunsell L1 at Ashford. A DMU tour was taken at Highworth Station, 32678 at North Hayling and to close the first half there were quick visits to Willesden Junction shed and Top Shed at Kings Cross.

Onto different forms of transport we saw London Bus RM1053 on Route 266 on the Edgware Road at the Armstrong Siddeley Works factory just after the withdrawal of trolleybuses on the 666. Two different TDs [a single deck half cab] were seen on the 240a at Mill Hill East Station with a Standard Stock tube train in the platform.

Darnall Shed was then featured before moving onto a ‘Tour of Seven Branch Lines’, where Hatfield, Harpenden East, Luton Bute Street and Leighton Buzzard were seen, with GNR 1247 again and 2P 40646.

And now for something completely different……London Trolleybuses

K1s 1146 on 657 at Isleworth and 1290 at Shepherds Bush Terminus also on 657. The others are L3s and were 1504 outside Chiswick Works, 1522 at Twickenham, 1499 at Fulwell Depot where tram tracks are still embedded in the yard today, along with brand new Routemaster Bus RM1093 and The Diddler No. 1 a half cab Trolleybus which is still with us today and 1514 at Kingston. Trolleys at the end of their lives were seen at Colindale Depot.

Back to the railways and at Darlington was B16 61413 on the scrap line. Mallard was seen at KX and Edinburgh, then Gordon Highlander was taken to Inverurie and the Old Meldrum branch.

We saw several locomotives powering through Hadley Wood Station and Tunnels including experimental Diesel D0280 Falcon. A busy Stewarts & Lloyds, Corby saw 0-6-0ST No. 7 and 21. ‘Half-Cab’ No. 41763 was spotted at Staveley Ironworks and at Hasland Shed we saw Crabs, Jintys and a 9F among others. A BR Standard 2 was at Grindleford, and we had a couple of superb views of Monsal Vale Viaduct, now just a memory of trains but still open as a long distance footpath.

Royal Scot 46167 was at Bushey Watertroughs along with others, 42350 was at Northampton, Seaton Junction, Uppingham, Wansford, Peterborough, Luffenham, Thrapston, Kettering and Rushden on a railtour. Over to the IOW and No. W28 Ashey was followed around to Ventnor, Wroxall, Shanklin and Ryde Pier. At West Ruislip Denbigh Castle was spied whilst on a visit to Wantage Road Station we had a view of No. 5 Shannon which ran on the Wantage Tramway and was plinthed at the station until it closed. We carried on down the line to Swindon Works where the following locos were hanging around, 2250, 4291, 6966, 6606 a 0-6-2T, 6817, 4171, 7799, 9425, 7341, 5003 with 4702 on the ‘Dump’. 68964 was at Doncaster Works, 64442 at Mexborough Sheds, while D8236 was on a railtour and photted at Liverpool Street, North Woolwich, Beckton Gas Works and Buntingford.

Over at Old Oak Common was a sad line-up of old Kings and finally on a S.W. Suburban Railtour in the freezing cold with failures right, left and centre we had 30585 and 30587 at Waterloo and Hampton Court, 30517 to Chessington South and Shepperton with the Beatties again.

Once again Geoff gave us an interesting and diverse tour of the country with some lovely photographs especially as they were by a 13-year-old and attracted an attendance of 86 very happy Zoomers who returned to their front rooms to savour their evening cocoa and reminisce. 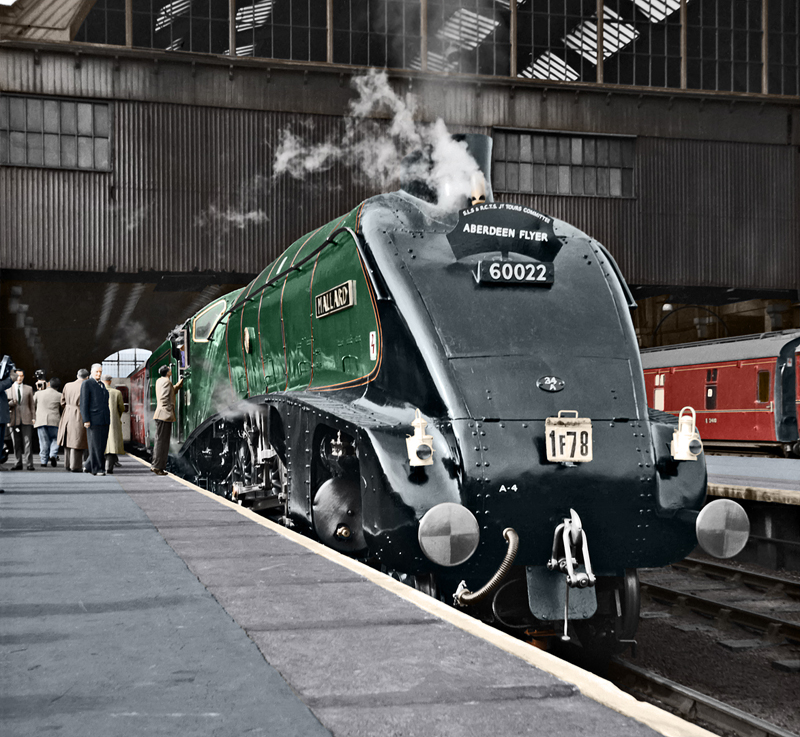 LNER Gresley A4 Class 4-6-2 No. 60022 "Mallard" waits departure time at King's Cross with the joint RCTS/SLS "Aberdeen Flyer", a weekend special from London to Aberdeen, outward via the ECML and return via the WCML the following day. "Mallard" was scheduled to run non-stop to Edinburgh but was foiled by a "hot box" on a goods train ahead of it not clearing the main line in time to prevent a signal stop. Saturday 2nd June 1962.