After a couple of physical meetings it was back to a virtual Zoom meeting, and as usual for December we had an evening of Members’ presentations. We opened with Committee Member Rob Freeman who  showed us the rest of the H.C. Casserley photos that he couldn’t fit in when he did last January’s presentation. 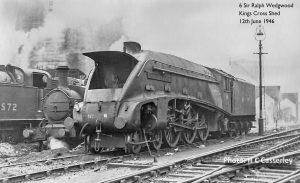 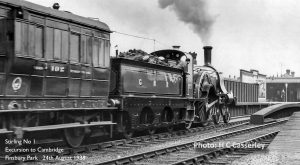 The wonderful signal gantry at Newcastle was viewed then Tyneside Electrics at Manors in 1947 and Percy Main in 1955, and our last shot was of 61199 on the Royal Border Bridge in 1955.

Next up was David Jackman, known to one and all, who showed slides from 2011 and started with a Class 57 pulling a Pendolino at Chester and a EMU 377 at Blackfriars during the rebuild. A Pacer was at Wakefield Kirkgate before renovation of the station. A Class 90 at Pudding Mill Lane, 66116 at Olympia, an EMU 313 at Moorgate with a 3-car train, something that doesn’t happen nowadays, another one seen leaving Lewes for Seaford, a pair of 86s at Kenton, EMU 465 at Abbey Wood before all the Crossrail work, EMU 332 and an HST passing Hayes, a Central Line 92 Tube Stock at East Acton, also a 92 Stock and a Class 168 at North Acton, DMU 172 at West Ruislip, Parry People Mover 139 001 seen leaving Stourbridge Town.

The forerunner of all those nasty railbuses was the Leyland Experimental Vehicle, a joint venture between Leyland and BR  to combine the worst features of rail and bus, and LEV1 was pictured at Weybourne on the NNR where it stayed until after its restoration before moving to the NRM who own it. An A60 set was at West Hampstead on a Baker Street service and another one in Northwood sidings on its way to the cutter’s torch, HSTs were at Newcastle and Mill Hill Broadway, EMU 455 at Weybridge, EMU 442 near Coulsdon, a 1938 Tube Stock on a railtour coming into Harrow-on-the-Hill from the Uxbridge branch, at West Ruislip was 67014 on the Up with DMU 168 on the Down, DMU 150 passing Tyseley, D Stock 7092 at Gunnersbury, 67003 on a VSOE at Nunhead, Class 172 at Moor Street.

Bernie Holland was up next with some videos which worked perfectly well. They were taken at the GWSR 40th Anniversary event on 6/7 November 2021. We saw 35006 entering Gotherington, 4270 with a Demonstration Goods Train with 20 happy railfans having a Brake Van ride on the Queen Mary, passing Southam Road Bridge, 7820 Dinmore Manor and 7903 Foremarke Hall entering and leaving Gotherington with 4270 heading to Cheltenham Race Course then 37218 to Broadway doing the same.

48 was the attendance and well done to Branch Chairman Geoff Plumb for organising this [his first] zoom meeting.