Our opening meeting of 2021 was attended by an online audience of 36 to receive two excellent presentations. These were delivered by the Branch Chairman, Steve Dexter, on his role with Network Rail, and first committee member Clive Pepper who took us on a colourful visit to Switzerland.

Clive has become a regular traveller to Switzerland having visited the country sixteen times since his first trip at Christmas 2010. As Clive related in his presentation what has kept him coming back is the variety and diversity of the railways that this small country, a sixth the size of UK, packs within its borders. Switzerland also boasts four languages – German, French, Italian and Romanish – and each are reflected in the names found on the railways. This can be a source of much confusion particularly when it comes to platform numbering, which is best described as idiosyncratic at best, even more so when it can be in different languages at the same station!

Clive’s early trainspotting days in the 1950s were inspired by a fascination with the names carried by steam engines. This was something that was reinvigorated when he returned to the hobby in the 1970s. He has also kept a keen watch on the many liveries worn on the UK railways since privatisation, some of which he reminded us of during his introduction.

This fascination with names and liveries set the scene for our tour of Switzerland’s railway system which boats 74 different operators! The main operator is the state owned SBB, Swiss Federal Railways, which operates the majority of the standard gauge network. There is also a significant number of narrow gauge systems. Each of these operators has a different style of advertising their presence and an array of striking liveries. As Clive illustrated this can be anything from a loco advertising the Swiss National Circus to all over liveries highlighting tourist destinations. A couple of examples are illustrated here. 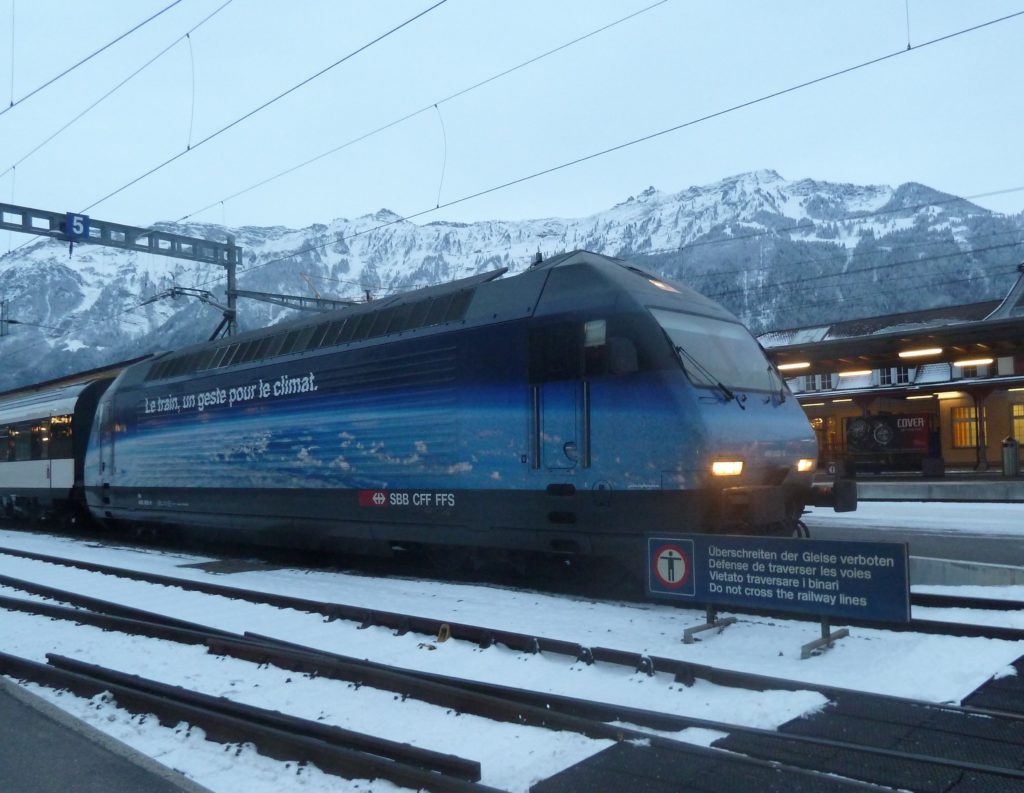 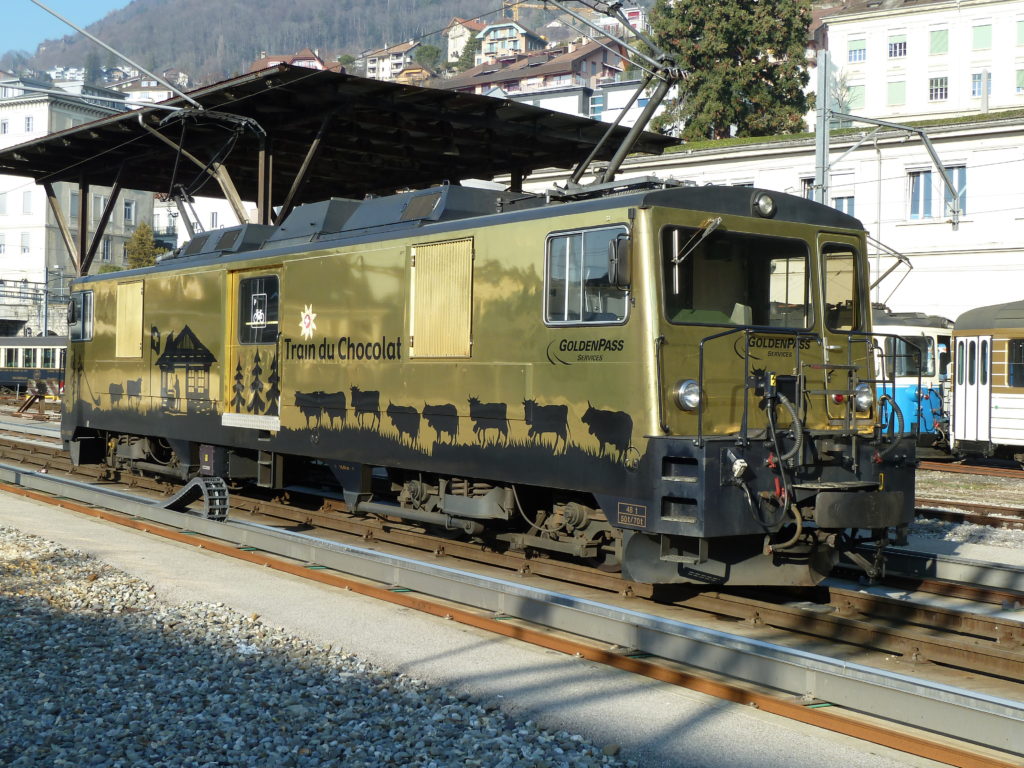 6003 is a MOB (Montreux Oberland Bernois) metre gauge locomotive. The locomotive livery ‘advertises’ the ‘Train de Chocolate’ which is a train (and coach) excursion that allows participants to visit a cheese making facility at Gruyeres and a chocolate factory at Broc. (Clive Pepper)

The rail freight sector has seen huge changes over the last few years. Whilst coal has been all but lost to the railway, there has been growth in areas such as aggregates and construction traffic. Approximately 970 freight trains are run across the network every day with DB Cargo still by far the largest operator with c.490 trains per day. This traffic contributes £1.7bn of economic benefits and involves the movement of £30bn of goods each year.

Steve is one of Network Rail’s six Freight Service Delivery Managers (FSDM), a role that was created in 2013 to focus specifically on Network Rail’s freight customers. The FSDMs, based at the National Operations Centre in Milton Keynes, provide 24/7 coverage on a shift patten. The role involves day to day management of the running of freight services, ensuing that the goods are delivered on time. Strict targets are set in the Freight Delivery Measure which is 92% of all freight to arrive at its destination within 15 minutes of its booked arrival time.

There is a strong emphasis on performance and monitoring worst performing freight flows, looking for opportunities to improve schedules and reduce delays. The FSDMs are a strong voice in decisions during disruption and are heavily involved in recovery plans when there has been significant incidents on the network. The role requires managing relationships across multiple levels both within Network Rail and externally with the freight operators.

As well as freight the FSDM team are also responsible for the Caledonian Sleeper. The sleeper has a target of 100% right time arrivals underlining the importance attached to these overnight trains.

The future for the rail freight sector looks bright despite the current uncertainties around COVID-19. There is a drive for faster schedules and running longer trains for both environmental benefits and efficiency as well as a developing market for high speed logistics. It certainly seems that Steve and his colleagues will be kept busy for many years to come!