For our April meeting, we welcomed back Colin Brading, who took us on a railway tour of India. India is a large country with 1.4 billion people and a railway system of over 40,000 miles and over a million staff. With such a large system, any visit can only scratch the surface. Colin first trip was in 1985, with a trip from Cochin in the South to Delhi with initially some road travel. Steam was much in evidence on this trip; in fact, steam lasted to the late 1990's. Although he had applied for the necessary permits to visit railway locations the permits were waiting for him at Delhi at the end of the journey! All went well however without paperwork until he reached the Darjeeling Himalayas Railway. At that point he was not able to proceed further due to the lack of the correct paperwork. 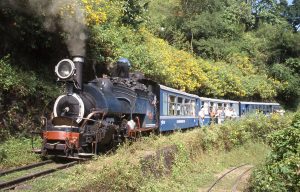 This was rectified in 2000 when a joint party of British and Austrians visited. The reason for the trip was that the year before. the DHR acquired UNESCO world heritage status, only the second one after the Summering line in Austria and the trip was one to officially twin the two lines. As so much has been published about the line, further comment would be superfluous. This second visit by Colin started at the Delhi Railway Museum, with interesting sights as the unique steam monorail which ran as a 0-3-0+1 running on the single running rail with a wheel on an outrigger running along the road alongside. Also seen was the steam engine which hauled the official last steam train on Indian Railways. The future for Indian Railways looks bright with a large programme of converting the metre gauge lines to broad gauge and electrifying the whole system by 2030. As to the DHR, despite frequent landslips and washouts causing the line to be closed (sometimes for months) the line is a vital link to Darjeeling. The iconic saddle tanks will be kept going in the line's own workshops. None of the locos will be sold, as the Indian Government has put a ban on it. Colin is to be thanked for his look at an intriguing country and especially its railway system, which has a more than promising future.