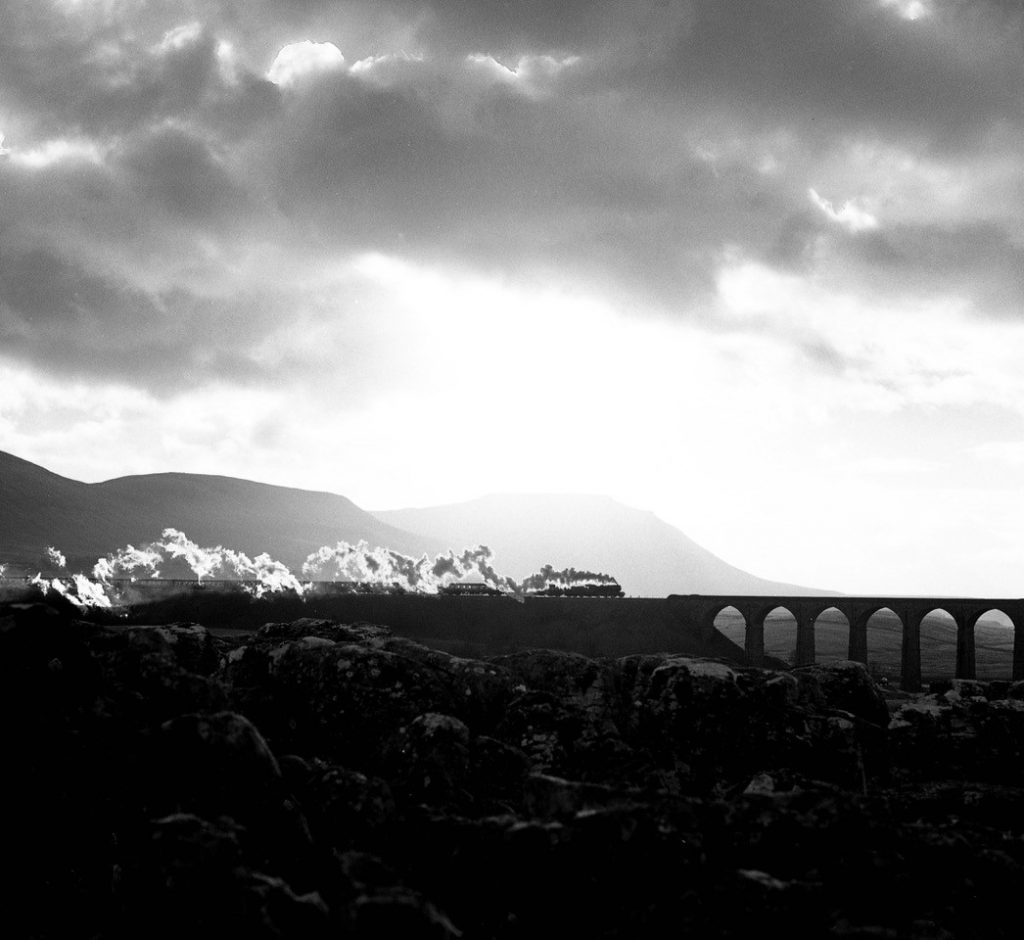 60800 'Green Arrow' is silhouetted by the low sun as it runs onto Ribblehead Viaduct with the Northbound 'Cumbrian Mountain Express' on 28th December 2001. Photo: Michael Smyth.

Chairman Robert Bartlett opened the AGM promptly at 7:30, drawing attention to the benefits of RCTS membership, the Branch’s extensive range of books for sale and the Society’s Library and Photographic Archive.

The Minutes of the previous AGM (2019) were approved and thanks were given to those serving as Officers of the Branch: Jim Crane as Branch Secretary, Keith Crossley as Sales Officer and Fixtures Secretary, Andy Dean as Treasurer and a welcome was given to the newly appointed Web Manager.

The Chairman appealed again for volunteers to take the Branch Secretary and Fixtures Secretary roles.

Reports were then received from the Treasurer, who summarised the Branch’s strong financial position, from the Sales Officer who has been prolific in his output and the Web Manager, who demonstrated the new Society website and the Branch’s pages.

All officers were re-elected unanimously. There was no Any Other Business and the AGM closed at 7:59.

The vagaries of the British weather were wonderfully illustrated as Michael Smyth used 50 years of photography on the Settle and Carlisle line to illustrate every conceivable type of weather condition: the dullest of dull days, heavy cloud with the sun breaking through at the last moment, full summer sun, silhouettes in mid-Winter, snow and sun, blizzards, wind blowing smoke the wrong way across a picture, driving rain, more rain and even more rain... not to mention three hour late running!

Scenes from travels around the country in 2021 were then presented by Keith Crossley. These covered local views at Harston, Queen Adelaide and Peterborough, followed by Birmingham New Street and a wide range of movements at Nuneaton, including 66s and 70s on Freightliners, the Blue Pullman HST, Class 92s on the Caledonian Sleeper and cows on the main line. Various Gala Days on the North Norfolk Railway were then seen, including some wonderful demonstration freight trains.

The Summer was reviewed month-by-month in David Goodyear’s slides which covered the North Norfolk Railway in May, York in June and the Amberley Museum Railway in July. August comprised a visit to the East Anglian Railway Museum at Chapel and several delightful views of B1 61306 ‘Mayflower’ on the ‘Steam Dreams’ railtours from Colchester to Bury St Edmunds. September concluded with a wide range of views covering the Wells and Wolsingham Light Railway, the North Norfolk Railway and its ever-popular steam galas, the Epping Ongar Railway and the majestic La Rotonde de Chambery roundhouse in France.

A feast of Great Northern signalling then followed as the Web Manager showed a selection of views from Boston to Skegness. The vintage infrastructure at Grand Sluice, Sibsey, East Ville, Bellwater Junction, Little Steeping, Thorpe Culvert, Wainfleet, Havenhouse, Seacroft and Skegness was illustrated as pairs of English Electric Class 20s took holidaymakers to and from the Coast.

Further travels were illustrated as Jim Crane showed how family commitments in Buxton could be flexed to photograph the stone workings at Peak Forest. These were followed by local views of the ‘Steam Dreams’ excursions at Haughley Junction, various workings at Shepreth Branch Junction and a range of traction types at Peterborough, the highlights of which were two of the newly outshopped GB Railfreight Class 69s.

The meeting closed at 10.03 with a vote of thanks from the Chairman to all presenters.