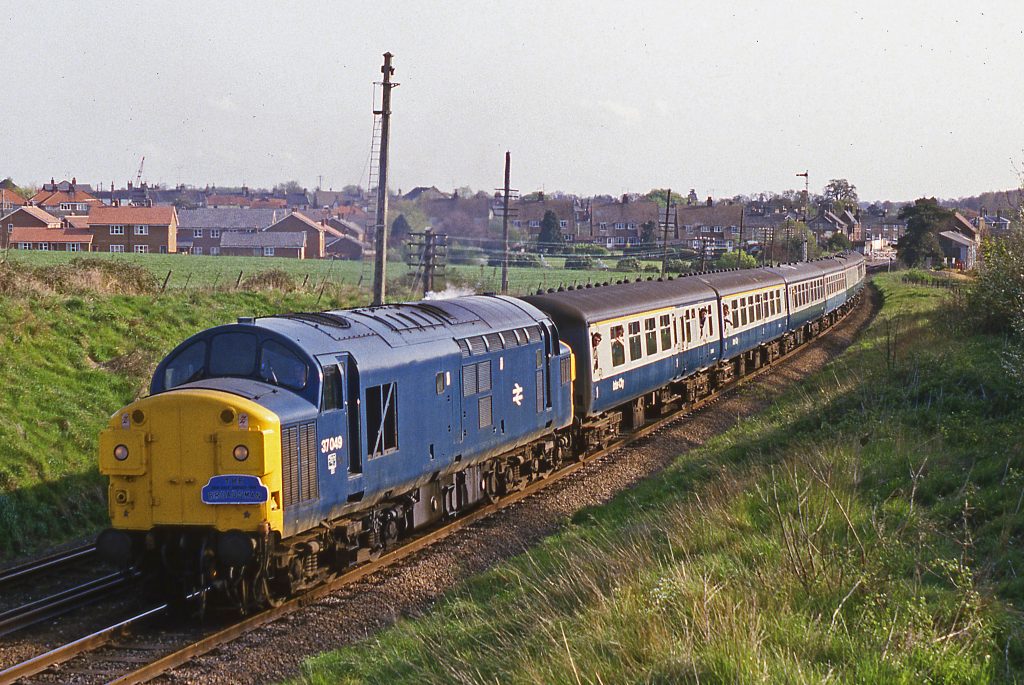 On 12th May 1984, the final day of locomotive-hauled services on the East Suffolk Line, 37049 departs from Saxmundham with the 07.19 Lowestoft to Liverpool Street. Photo: John Day

2022 began with our long-standing friend John Day taking us on a tour of East Anglia in the days of BR Blue.

We began on the Bury St Edmunds line with delightful views of Class 31s hauling rakes of Mk1 stock on Peterborough-Harwich services and many examples of the rich variety of freight traffic over this route including Peaks on stone trains to Barham, a Class 25 shunting grain at Kennett and scrap from Snailwell. A particular highlight was Class EM2 1502 (formerly E27000 Electra) enroute from Holland to Doncaster Works.

After Cambridge and Class 31s on the sand from Fen Drayton we headed towards London with views at Shepreth Branch Junction and of Bishops Stortford Yard. At Stratford we saw Freightliner traffic coming off the North London Line, before heading down the Great Eastern main line with plenty of views of Clacton Units, including the inaugural “Essex Express”. The early days of electric working on the Norwich main line were amply illustrated, with views including 86324 on driver training with stock from the East Anglian TPO and 86401 freshly outshopped in Network South-East livery. On the Harwich Branch, in addition to the large quantities of air braked freight movements, we were treated to rare views of a Class 08 hauling ammunition down to Mistley Quay, destined for British Forces in Germany.

On arrival at Ipswich, the richness of freight workings down to Griffin Wharf and Cliff Quay were wonderfully illustrated with a variety of traffic that once seemed commonplace but has now all-but disappeared - dock scenes with Class 03s and 08s, oxygen trains, grain, coal, cars, oil and even brake van tours.

After Ipswich we headed down the East Suffolk Line with 40004 on the ‘Broadsman’ railtour at Melton and the last locomotive hauled working on the through Lowestoft to Liverpool Street service in 1984. John described how his work for the Gas Board helpfully took him to Leiston on Thursdays, allowing him to photograph the Thursday-only Sizewell working and also to meet with Dr Ian Allen and Gerard Fiennes!

After the East Suffolk Line, a pair of Class 20s on Grainflow wagons reminded us of the days when Lowestoft docks handled freight traffic and a pair of Class 25s on the Yarmouth-Derby Summer Saturday working were a flashback to the days before budget airlines.

No tour of East Anglia would be complete without a visit to Whitemoor Yard, which we saw from Norwood Road bridge with the Wisbech to Deanside working passing Whitemoor Junction. Returning to the Ipswich area via Ely we admired the wonderful semaphore signalling at North Junction and around the station. The highly unusual one-day opening of ‘Black Bear Halt’ on the St Ives Branch on 15th May 1987 was illustrated with 47413 on a VSOE charter.

The tour completed by heading back from Ely Dock Junction to Ipswich, culminating in a stunning night view of a Railfreight Class 90 on Manningtree Viaduct, taken alongside the official photographers for the Railfreight calendar.

We are greatly indebted to John for a marvelous evening of excellent photography, exposition and anecdote from his treasure trove of experience.

The meeting closed at 9.55 with a resounding show of appreciation from the audience.