For our second physical meeting since March 2020 we welcomed Steve ‘Slasher’ Batty, who is the RCTS Branch News Editor, for his presentation of ‘Northern Travels Past & Present’.

Sadly, perhaps due to ongoing uncertainty around physical meetings, only 19 members and non-members turned up for an interesting and informative evening of many and varied locomotives in many locations mostly in Yorkshire, some of which were quite varied and not seen before. 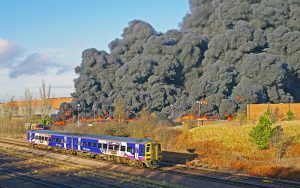 158 794 working an unidentified westbound local from the Selby direction past the blazing tyres at Gascoigne Wood, at 10:54¼ on 16th January 2014. Image Credit: Steve Batty.

We started off in Steve’s home town of Selby with an Up Hull Trains, an RHTT top and tailed by Class 20s, and in bay platform 3a was a Class 142 Pacer, very common at the time of photography, now just a memory. 66779 Evening Star was also seen. Henwick Hall Signal Box was in its glory but now sadly gone, and east of Selby was 66721 Harry Beck in LT Map livery while west of the station was a Class 66 off to Grassington, along with three Class 20s with an imported ballast train where most of our railways ballast comes from.

Hanging around south of Hambleton there was a veritable array of locomotives including 60009 Union of South Africa which is now destined to be plinthed in Fife at the owner’s premises, 3 shots of Class 91s of which two were in the snow, also a Class 47 and 60103 Flying Scotsman, a pair of 47s on a scrap train, and A1 Tornado in apple green.

At Milford Junction a 66 with a stone train and 47593 with a Statesman Rail Special. At Ulleskelf, where few passenger trains stop, were a 47, Flying Scotsman, three Pacers and ‘Castle’ 5043 Earl of Mount Edgcumbe. A Trans Pennine 185 was at Colton Junction along with a couple of East Coast HSTs, the Network Rail ‘Yellow Peril’, a couple of 47s and a couple of Class 50s at Bolton Percy. At Goole a Class 52 Western, the RHTT and ‘Jubilee’ No. 45690 Leander in BR black livery. A 66 was trundling over the River Ouse. At Thorne North was the 66 on cement, RHTT with Class 20s, then a couple of 56s.

At Hatfield & Stainforth Station Pacers and various locos were seen, whilst at Kirton Lindsey Lime Works we saw a Class 185 on a SO working, then along to Barnetby where we had ‘before and after’ shots of the semaphore signals and colour lights. Up the line at Brocklesby was a pair of 56s with tanks and a 66 on a coal working; at Kellingley Colliery there was another 66 and a 60 both with coal trains, and another 66 at Whitley Bridge. Back at Eggborough we saw a 31 working a Trans Pennine, Harry Beck again and a 66 on cement. At Drax Power Station was a 60, also a pair of 47s with a gypsum train at Carlton Station.

Further 66s were seen at Drax, Todmorden with empties, Brighouse with bitumen empties and Oakenshaw with a stone train, together with a passing Pacer. At a very dilapidated Wakefield Kirkgate was the ‘Yellow Peril’ this time behind a 37 before moving to a rather full Healey Mills Yard.

At Leeds was the Scarborough Spa Express behind LMS ‘Royal Scot’ 46115 Scots Guardsman, and east of Leeds was a 68 on a TPE from Scarborough to Liverpool, a Class 70 with a cement train, and at Midland Road Depot another 70 with tanks, and a few locos and wagons. At Peak Forest 56080 was seen along with a few 66s. We then had shots of LMS ‘Jubilee’ Galatea, 60103 Flying Scotsman, along with a 37, 68 and a Class 802. Approaching Cattall was a 57 hauling ‘The Northern Belle’. A wonderful shot of the iconic Knaresborough Viaduct, then followed this with Kirkham Abbey Signal Box, also an EMT HST, SR ‘Merchant Navy’ 35018 British India Line and LMS ‘Jubilee’ Leander at Malton. 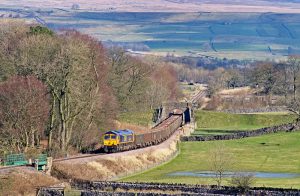 Over to the Settle & Carlisle line we had three 66s in tandem, Leander again, a 60 with a Carlisle to Chirk logs train, a 68, a Thompson B1, British India Line again, a pair of Black 5s. K4 The Great Marquess, a 70 on logs, the ‘Yellow Peril’ at Arten Gill Viaduct, a 47 and finally there was Tornado.

We closed the show with a Class 68 on a TPE train at Golcar. 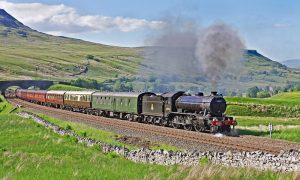 A very enjoyable show much appreciated by all those there – highly recommended!