This was going to be a physical meeting, our first since March 2020, but our usual venue was unavailable and also after taking a poll amongst Branch members about how they would like to have meetings, we felt we would try and accommodate their wishes, so we will be trialling physical meetings in October and November but with no refreshments and Zoom meetings in December, January, February and March returning to physical in April!!

So I begged our former Branch Chairman Rob Freeman to do yet another presentation for us at short notice and he bravely stepped in with a new one entitled ‘Rob’s Years – 1997’ which features UK, France and Germany.

We started with Deltic 9000 at Peterborough on 2nd January, some redundant Class 141s at Doncaster in store, along with 08682 shunting some new Class 365s. The Deltic was also seen at Hull and York where Rob (and the Deltic off the tour!) visited the NRM with more shots from there.

Over the presentation many photos were taken at Cow Roast, a popular spot on the WCML near Tring including a Class 86 assisting a train along with several others of this class. A Class 58 in Mainline livery and pulling three Class 92s was a Class 90. Moving to Nottingham was a Class 60 in Loadhaul livery.

On a Railtour we saw a pair of Class 33s at Scarborough and at Berkhamsted were Class 31s along with many others as this was another favourite spot for Rob [he lives close to the station].

A wide range of classes were seen at various positions around Willesden Junction – 58, 59, 60, 37, 90 and 47 in Railfreight livery, and moving along to Clapham Junction many EMUs and locos were spotted and moving over to Kings Cross we saw a row of Class 91s lined up in the platforms. Back at Cow Roast we saw 90002 for its first run in Virgin Livery and a 56 in Transrail livery. A 60 on EWS fuel train on the MML with a Class 319 and HST in long gone liveries seen as well.

At Didcot a HST in ‘Roadrunner’ livery, plus a 37 with tube stock and also a 37 with a fuel train at the Power Station and along the line we saw 8 locos stabled at Didcot and a further seven stabled at Newport Godfrey Road

Visiting the Crewe Electric Depot Open Day we saw a string of 20s, an 06, 73101 in Pullman livery, E5001 and Britannia. Popping along to Loughborough we saw many different types and a few in Brush Works. Then to the GCR where D4 was spotted posing as D6 and we saw the frames of Bittern, that had been in silver livery. Closing the first half we had a Class 319 with one of the first Brighton to Rugby trains. 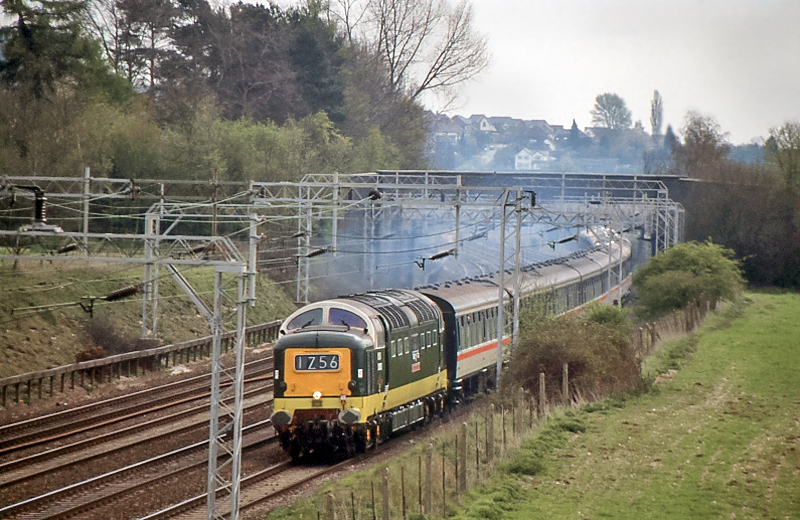 The second half opened with a visit to France where we started with an SNCF X1500 Class DMU at St. Etienne and vintage X5600 and Picasso units and trailer, a DD TGV at the old Lyon Station, Pėrache. Then a shot inside the Eiffel- designed roundhouse at Chambéry, including CC 6500s and then CC7100s at Avignon shed. There were five stored BB 8100 Class locos at Béziers works plus a further twenty-one BB9400s stored at a wayside station. At Toulouse BB 8145 was on a freight and a 141R was preserved on shed.

At Limoges Station there were various units of various ages with twelve Class 66 locos [not our Class 66] at the depot. At Tours were 9600 Class on the Shuttle, BB 9300 Class and CC1100 [Crocodiles] used for shunting. There was a new 36000 Class at Le Mans, also first generation Express electric loco 2D2-5525 [Pug Nose] and 9200s on shed at Paris Sud Ouest, At Lens were Sybics and the last working BB12000s along with several of their withdrawn classmates

Back on home soil there was a shot of Princess Diana’s funeral train passing through Berkhamsted.

On his trip to Germany, Frankfurt was the first call and a Class 103 was seen along with preserved 118 003, a flagship express type from the 1930s which, had things gone differently, would have been developed for use on Berlin to Moscow expresses, also a Class 112 and 151. 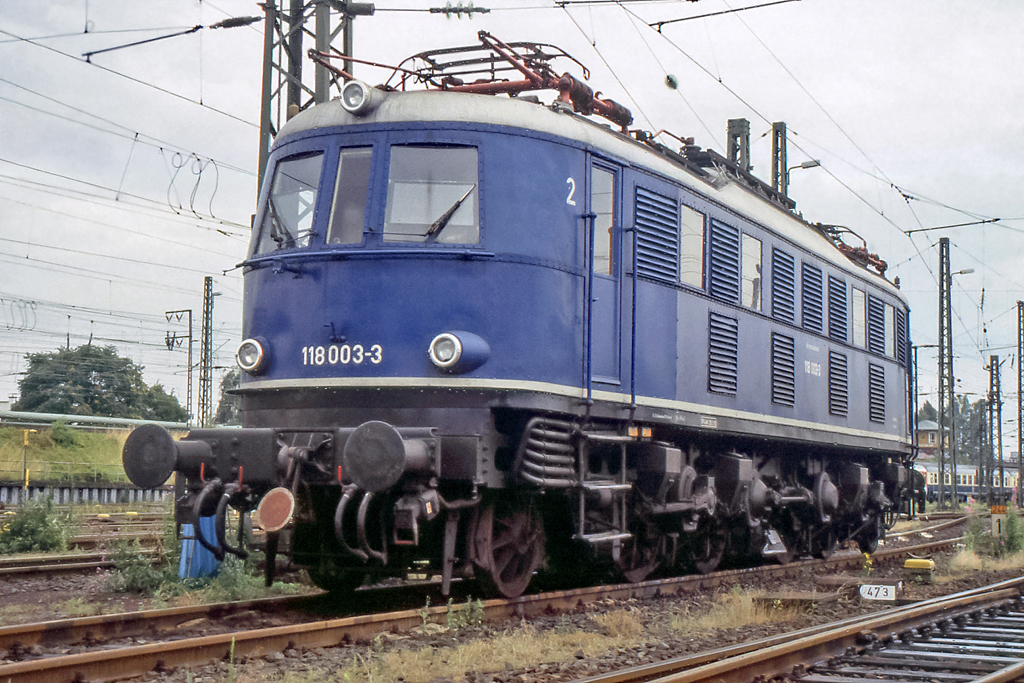 DR Class E18 1’Do’1 No. E18 003 was built in 1935 for high speed electric express trains, later being taken into DB stock and renumbered into the 118 series when computerisation of the numbering system took place around 1968. The class continued on express services until around 1970 after which they were demoted to regional trains and charters, being withdrawn from 1976 to 1984. No. 118 003-3 was preserved, as seen here at FF1 Depot in Frankfurt in 1997, and is now housed in the DB Museum at Koblenz. Photo Copyright © Rob Freeman.

We saw inside the S-bahn depot at Munich then some Class 402 ICE trains at the main depot and a brand-new next generation Class 101 of which just the first ten existed in 1997 and lastly here was preserved E75 09 from the 1920s.

Our last stop was at Mannheim where many locos of different types were on show.

Back in blighty Taw Valley was seen at Cox Green. On the SVR a variety of locos were spotted including LMR Gordon. A couple of 59s were seen on the iron ore trains in South Wales and a 58 on the Avon – Calvert Bin Liner approaching Didcot. A lovely one of 86206 rescuing a 90 at Willesden Junction. A wide choice at Wandsworth Road – Class 365 EMU, a 37, 47, 60, 73 and a Eurostar 373 when they used to trundle this way to the Continent. At Northchurch was 87101 with four 92s in tow and finally finishing with a pair of 33s at Exeter on the “65 Special” farewell tour.

As usual a varied and interesting show from Rob and I thank him for it, with 45 attendees.