Before the normal meeting started the branch Annual General meeting was held. The result of which the branch committee was unanimously voted back into office. The minutes of the AGM are available upon request. 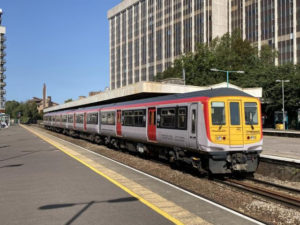 The normal meeting followed and Colin introduced his presentation by giving a brief history of the situation in Wales with regard to the transport systems. It is all change for Wales. Transport for Wales was established in 2016 as a “Not for Profit” concern owned by the Welsh Government. It does not have any Statutory powers or sets policies. It does provide expert advice to the Welsh Government and manages the delivery across different transport modes, including ticketing, bus provision, flexibus and book and ride. One of the changes is the establishment of a Metro style network North of Cardiff. The franchise powers for Welsh Rail Services, which, the Westminster Government transferred to the Welsh Government in 2017.

A 15-year contract was awarded to operate rail in Wales and on 14th October 2018 Welsh Rail Services began to operate the services which until then had been operated by Aviva Trains Wales became the responsibility of Keolis Amey. Many of the services were operated by Pacers which had a dispensation to operate until late 2020. The fleet was supplemented by class 319’s (bimode) ex Thameslink. A £800m programme to replace the aging fleet which will include FLIRTS from Stadler in Switzerland. Also ordered from CAF, Spain, 77 sets of class 197 which were assembled in Newport destined to be used on prime intercity services. On test are class 230’s. The plan for new trains include the “Gerald of Wales,” named after member of the clergy who was widely travelled. This service operating between Cardiff and Holyhead using class 67’s and a DVT, latterly using ex LNER Mark 4 coaching stock.

In Southeast Wales, the Core Valley Lines (CVL) network, including the lines radiating generally from Cardiff to Treherbert, Aberdare, Merthyr Tydfil, Rhymney, Coryton, Pontypridd and including Cardiff Bay and Cardiff Queen Street. The importance of the CVL is reflected in the number of journeys, 554600 SE Wales, 87500 Mid and South and 20200 in the North. The result is a pretty old and rundown network. Above Aberdare the only freight was coal. Cardiff Bay, Bute St Station does not meet the needs of the area. The Cardiff railway company had major links to shipping and rail. Welsh steam coal being a major exporter from the docks, in 1921 it served 600+mines. whilst timber (for pit props) being the major item being imported. The docks alone had 120 miles of track within a 1 sq. mile.

With building of the Barry Railway in 1905, Barry Docks became a major competitor to Cardiff Docks and in time did become the major port in South Wales.

The second half of the meeting Colin brought us up to date specifically about the South Wales Metro. “A catalyst for transformation in the Cardiff region.”  It is proposed to have 36 Stadler “Citylink” bimode Tram-Trains, Flirt’s 24 Tri mode units and 11 DEMU’s, and the intention to electrify the lines. A budget of £738m was set which included the building of a new depot at Taffs Well together with a control centre within this complex, remodelling and doubling of track to Queens

The class 197’s are on test on the North Wales route.

Colin finished his talk with some pictures he had taken on a visit to the Brecon Mountain Railway.

The branch chairman, Phil Darlaston gave a well-deserved vote of thanks to Colin for a very informative evening and welcomed him back at some time in the future.  An audience of 47 people joined in the thank you.