On December 15th the Branch held its AGM which was combined with the previous AGM which had been postponed owing to the pandemic. The Branch committee were re elected en bloc to serve for another year at a somewhat disappointing but understandable turn out of members.

After a refreshment break for some festive food the remainder of the meeting was Members Choice. This was a selection of anonymous images from an index of John Day's extensive library going back many years so nobody knew what might be shown. Many images featured East Anglian scenes including the same locations such as Belstead Bank and Cattawade Bridges, taken over the last twenty five years or so. Selections included Class 315s at Chelmsford, the dwindling number of Class 321 units including a ONE Railway liveried example and numerous freight, passenger and other workings over the period with some of the traction no longer featuring in the area. 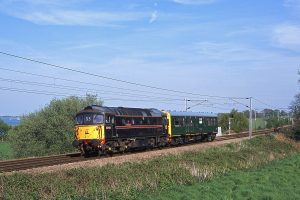 Preserved networks such as the Great Central, Severn Valley Railway and locally the Mid Suffolk Light Railway were shown and also scenes from The Bure Valley Railway in Norfolk.. Other locations included the ECML at Peterborough and Hitchin, a Class 47 at Dumfries, HST Units in the West Country and Chiltern units at Harrow on the Hill.

The afternoon concluded with images from the opening day of Soham station between Bury St Edmunds and Ely having been closed for over sixty years. We would like to thank John for a thoroughly enjoyable presentation.