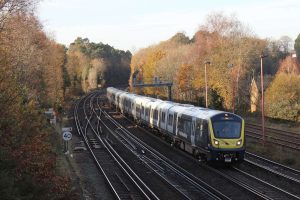 Our Photograph of a Class 701 is courtesy of Bob Ellison.

RCTS Surrey and Windsor and Maidenhead branches have a large number of second-hand books available for sale at our meetings.

Click here for the list of books available as at April 2022 (.pdf file, requires Adobe Acrobat to view)

If you would like to purchase any of these books please contact the Surrey Branch Exhibitions Officer, Andy Davies to confirm availability.

We will then endeavour to have the relevant book available at our next meeting.  Only a selection of our books are taken to meetings, so please contact us in advance with any specific requests.

Please note that we can not sell these books other than when collected at a Surrey or Windsor & Maidenhead Branch Meeting.

Also see the Archive and Library pages for additional books for sale.

The View from the House

Speaker: Chris Loder – MP for West Dorset Chris is unusual as an MP on the Transport Select Committee as he has first-hand experience of working on the railways.  He…

Presenter: Dave Coxon Everyone was welcomed, before a minute’s silence for HRH Prince Philip whilst photographs of the late Prince were shown. Dave introduced himself with a brief outline of…

Presenter: Cliff Perry, Railwayman All were welcomed especially our speaker Cliff Perry, who would be talking about railway safety and providing an update since his previous visit to the branch…

Presenter: Paul Seller – Interim PMO Director, HS2 Paul was originally scheduled to talk to the branch in October 2019 but was taken ill at the very last minute so…

Presenter: Andy Davies The business of the Branch AGM went smoothly with the agenda, minutes of the previous AGM, reports and accounts all having been circulated in advance. They were…

Presenter: David Brown After being introduced, David went straight into his presentation. A number of railway companies were experimenting with electrification by the early 20th century and David explained how…

27 October 2020 · Bringing Back the Brighton Belle

Presenter: Gordon Rushton The presentation started with a question – why restore a 1930s train for 21st century mainline use as this is ‘insanely difficult’? It was said that it…

Presenter: Mark Hopwood, Managing Director (MD), South Western Railway (SWR) We welcomed Mark as the speaker at our first virtual branch meeting. He explained that he was only supposed to…

Presenter: Chris Nettleton, honorary editor of the Gresley Magazine, membership secretary of The Gresley Society Chris briefly introduced himself before going straight into the presentation. Herbert Nigel Gresley was born…

Presenter: Adrian Shooter – CEO Vivarail Long-time career railwayman Adrian Shooter described how he had retired about 8 years ago but quickly became bored after only two weeks of retirement.…

Presenter: Gordon Pettitt The meeting held on 17 December 2019 comprised the Branch AGM and ‘An evening with Gordon Pettitt’ separated by an interval for socialising and enjoying some excellent…

Presenter: Alan Nichols, Train Driver retired Alan kindly stepped in at short notice when Andrew Haines advised that he would have to leave early because of his work commitments. He…

Presenter: Paul Seller, Commercial Director, Infrastructure Directorate, HS2 Please note that this did not go ahead for reasons which will be apparent when reading the report Our booked speaker Paul…

Presenter: John Cartledge – former Head of Policy and Research at London TravelWatch Our booked speaker was unable to attend so John stepped in to tell us about his home…

Presenter: Steve Ollive Steve introduced himself and explained what the talk was about – a railway tour in Europe to celebrate three sixtieth birthdays and a silver wedding anniversary with…

Presenter: Chris Meredith Chris gave a brief outline of his early contact with the Merchant Navy class of steam locomotives as a child living in Broadstairs, before providing an outline…

Presenter: Murray Brown – Deltic Preservation Society Murray began with a brief resumé of his background in railways mentioning that his father used to work for ICI and knew Dr…

The Mid-Hants Railway (The Watercress Line)
Running from a main-line connection at Alton through rolling countryside to Alresford in Hampshire, the line portrays Southern practice in the 1960s era.  See www.watercressline.co.uk for further information on services, special events and facilities.

The Great Cockcrow Railway
This is a 7¼ in gauge line located in Lyne, near Chertsey, Surrey. The railway offers an intensive service over two routes, each over two miles long. The site has some twenty steam locomotives and several petrol units. The site is open every Sunday afternoon between Easter and October and certain other afternoons. See www.cockcrow.co.uk for further information on services, special events and facilities.

This is a 1km line with gauges of 7¼", 5" and 3½" with varied resident and visiting locomotives. Trains normally run on the first Sunday in each month from March to November. The are a number of additional sessions during school holidays and some Bank Holidayss
Further information available at www.flmr.org

Mizens Railway
Operates every Sunday afternoon from the start of May until the end of September and Thursday Afternoons in August at Barrs Lane, Knaphill, Woking.  Further information available at mizensrailway.co.uk

Malden and District Society of Model Engineers Ltd
Operates the Thames Ditton Miniature Railway, Claygate Lane, Thames Ditton, which can be seen from the main line near Hampton Court Junction.  The railway operates Easter Sunday and Monday, then the first Sunday of the month and every Bank Holiday Sunday and Monday until the first Sunday in October.
Further information is available at www.malden-dsme.org