Our guest on October 11th was Peter Smyth to present Preserved Railways, Past, Present and Future. The origins of the Railway Preservation Movement were described including pioneers such as the BlueBell and Ffestiniog Railways and also the availability of closed branch lines for redevelopment and a supply of redundant steam traction for restoration, mainly from Barry Scrapyard. 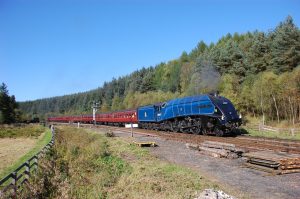 The majority of the current preserved lines were featured from giants such as the North York Moors and Severn Valley to smaller lines such as the Foxfield and Mid Suffolk Light Railway. Steam and diesel galas were featured together with celebrity visitors such as Flying Scotsman and Tornado. Preserved rolling stock was seen together with behind the scenes views of ongoing restoration and maintenance including infrastructure and signalling work. Some lines such as Llangollen and West Somerset have suffered from financial mismanagement highlighting the necessity of keeping costs under control. The current number of replica locomotive build projects was considered to be unrealistic with few expected to be completed in the manner of Tornado in 2008.

There are many clouds on the horizon including the effects of the Pandemic, volunteer age profile, training and environmental issues and perhaps there will be fewer sites ten years from now. We could have reached the peak of the Railway Preservation.