Our branch meetings recommenced on 13th September with Steve Batty presenting Northern Rails Past and Present. Starting our journey at Selby we saw a wide variety of workings across Yorkshire and North Lincolnshire taken in all weathers over the past ten years or so.

Some workings, especially freight featured many times at different locations with a wide selection of backdrops, some of which are now history such as Kellingley Colliery, and the cooling towers at Ferrybridge and Eggborough Power Stations. Dramatic images featured included the flooding in the Aire Valley and trains in the snow on the Selby Diversion. Other locations included junctions at Colton, Milford and Hambleton with a favourite location of Burn on the ECML also shown. Both modern and heritage traction were featured with some dramatic smoke effects in low lighting conditions adding to the atmospheric feel of the presentation.

The sad sight of Healey Mills Yard and the surrounding area including Horbury Cutting also featured with track rationalisation very apparent and redundant Pacer units on their final journeys for scrapping. In North Lincolnshire the doomed semaphores at Barnetby were shown in low light and Brocklesby and Hatfield stations together with the much bashed Goole Swing Bridge also featured. On the Grassington branch it was sometimes difficult to identify the aggregates train, as such a high viewpoint was used to encompass the glorious scenery in the area. On the Settle and Carlisle line images around Ais Gill and other locations featured together with a superb distant image of an HST Set on Arten Gill Viaduct 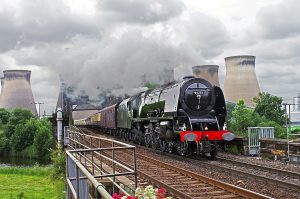 The preserved networks of The Keighley and Worth Valley and North Yorkshire Moors Railway showed visiting traction including an HST set climbing to Goathland on the latter. This was a top Quality presentation of superb photography and is highly recommended to other branches.