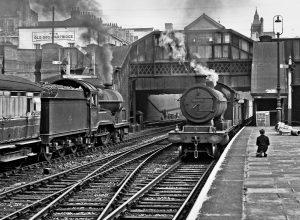 At our February meeting we welcomed Dave Pearce to present more Tebay from Ebay images. This was a selection of the above purchased from the online auction site and featured the work of 30 photographers throughout the network. There was strong competition for these with enhancements required on some to improve their quality. The scenes at Appleby in 1978 featured the commemorative specials for the late Eric Treacy and then to Tiverton Junction to include workings on the Hemyock Branch. 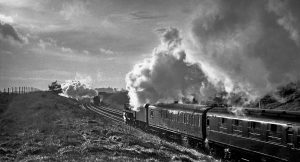 Views on the Southminster and Easingwold Branches were followed by a snowy Colwick and an aerial shot of Chippenham Junction in 1961. East Anglian views taken by Doctor Ian Allen showed the Great Yarmouth Docks tramway and also a brake van tour at Wells next the sea hauled by a J17 Loco. The North Devon Branch network included Wadebridge, Ilfracombe and the Wenford Bridge line with its unique Well Tanks. Images on the ECML included Newark, Great Ponton and a sequence at Potters Bar by G R Mortimer whose log of that afternoon was also shown. 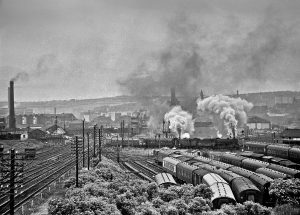 The final years of steam at Bradford included holiday workings to the east coast and local workings in the Leeds area. Scenes on the Somerset and Dorset included The Pines Express near Masbury and workings at Tebay and Greenholme showed both steam and a Class 40 hauled Royal Scot at Shap Wells. Images from the Southern Region included overhead catenary at Clapham Junction in the 1920`s and services on the Lymington Pier Branch and Seaton Junction.

On the Midland Pye Bridge and the Nottingham area included both major stations, and the run down Annesley depot and yard complex, many taken by our late branch member Dave Swale, and also the complex track layout at Trent Junction showing a wide variety of workings. The programme included some dramatic smoke and lighting effects with a level of artistic interpretation being shown by some of the contributors.